Balance in Magick- Left and Right

Consider the herbalist’s scales: things are carefully weighed out to achieve a desired balance. Magic plays with balance too. Sometimes the desire is for all forces to be equal and harmonious. At other times goals are accomplished by deliberately, consciously tipping the scales to provide the required effect. 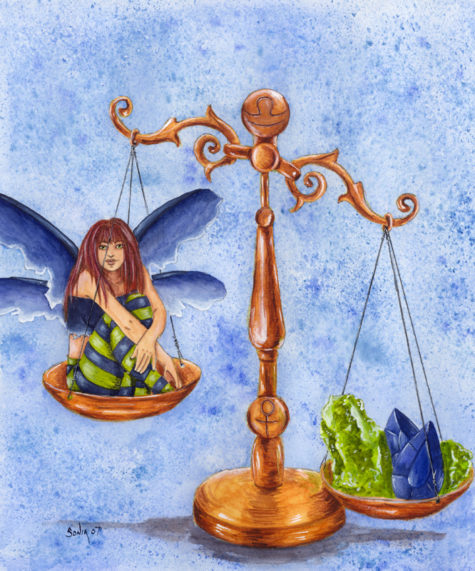 Once upon a time, not too long ago, the concept of Dualism associated the direction right with God, high, male, and all those good things. Thus children were forced to use their right hands, the dexterous hand, whether that was their dominant hand or not. Children who were naturally left-handed (the sinister hand) literally had it beaten out of them until they were dexterous too. Consider various phrases: in the right, Mr. Right, the left-hand path, a left-handed compliment.

Connections between genders and these directions, however, predate Dualism and Christianity. They exist in completely unrelated cultures, including some that were isolated for a very long time. Hawaiian magic, for instance, associates left with female, right with male as surely as the Chinese and many Asian, African and European traditions. Frequently offerings to female deities are made with the left hand (by both men and women) while offerings to males are made with the right (by both men and women). Feng shui suggests that it’s beneficial for women to sleep on the left side of a common bed, while a man should sleep on the right. (Although spells intended to reverse the power dynamic within a relationship may suggest those sides be switched.)

Sometimes spells direct that an action be performed with either your left or right hand. Either one of two things is being requested.

1 – Because left is yin and yang is right, the left side of everyone’s body is yin or affiliated with “female forces” while the right side is yang and affiliated with “male forces.” Most frequently a spell’s success depends upon accessing one force or emphasizing one quality over the other.

2 – Sometimes the spell’s success depends upon not using your dominant hand. Because until recently everyone was forced to be right-handed, many older spell books will specify casting a spell with your left hand, because it’s assumed that everyone is right-handed. This is, obviously, no longer the case.

In newer spell books, where the importance lies in not using your dominant hand, this is specified in spell-directions. Left-handed people will be directed to use their right hands. Where no such direction is given, if the only stipulation is to use your left hand, then this applies to everyone across the board.

Article from: Encyclopedia of 5,000 Spells

Related Posts
On Practical Magick
All You Need Is Love
How To Be A Good Witch
Magick Circles, Why Use Them?
What is Magic?
Popular Spells
Ask Our Resident Witch

Stats
Archives
Breadcrumbs
If you lose your way, here is a trail of breadcrumbs showing where you've been here on the Book of Shadows... Book Of Shadows > Blog Page > Balance Spells > Balance in Magick- Left and Right
We use cookies to ensure that we give you the best experience on our website. If you continue to use this site we will assume that you are happy with it.Ok