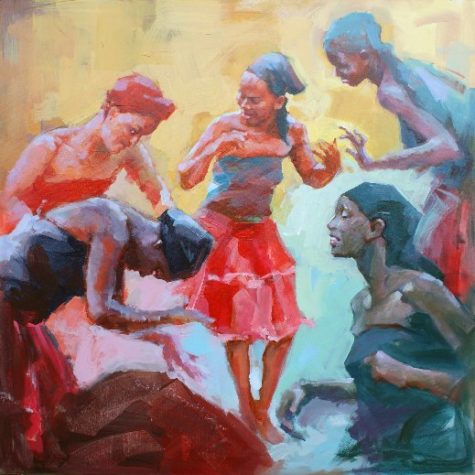 Why does singing and chanting have such a powerful effect on us? Repetitive or boring tasks are easier to perform if there is a tune in the background, or if someone starts to sing.

I remember with particular fondness the “work songs” which were evolved when I spent a few months picking oranges and grapefruit in Israel, and they certainly livened up what was a boring and strenuous task. Songs and chants establish rhythms, which not only distract from the boredom of a task, but also seem to add energy and help “carry” each person along. Group spirit and enthusiasm is raised.

One of the key factors seems to be rhythm. rhythms carry our consciousness along, from heartbeats, to cycles of breathing, sleeping, night-day and the passage of seasons. rhythms promote associated body movements and adjustments, and act as a signal to begin movement without conscious effort, so that less energy is expended when you begin; for example, it has been shown that soldiers can march further, and in better form, with less fatigue, when accompanied by a marching band.

The feeling of being “carried” comes from the structure that rhythm gives to our time-sense, and the pattern gives a sense of continuance. It becomes a motor attitude, and one’s attention is freed (if this is desired). rhythms also become “mirrored” by our brain activity, and they have powerful physiological effects on us. Music Therapists have found that people suffering from Aphasia or Huntingdon’s Chorea (both neurological disorders which impair speech) can carry a tune, and group singing is a common element in therapeutic voice training.

Rhythms are everywhere around us, and group chants and songs reflect this fact and bring us towards an enhanced sense of participation in the world.

From The Magical Use of Voice

Related Posts
Why Magick?
Strengthen Your Psychic Abilities
What is Magic?
Balance in Magick- Left and Right
All You Need Is Love
Popular Spells
Ask Our Resident Witch

Stats
Archives
Breadcrumbs
If you lose your way, here is a trail of breadcrumbs showing where you've been here on the Book of Shadows... Book Of Shadows > Blog Page > Basic Concepts > Why Chanting Works
We use cookies to ensure that we give you the best experience on our website. If you continue to use this site we will assume that you are happy with it.Ok