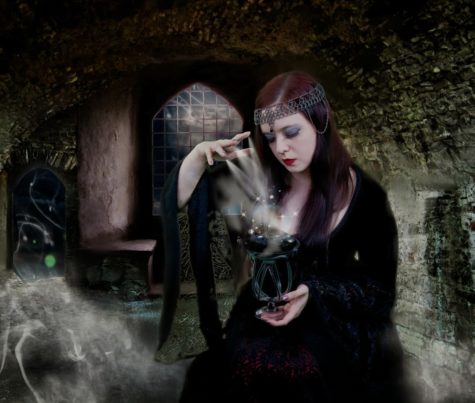 When people think of the word magic, the average person probably thinks of Samantha in “Bewitched” twitching her nose to turn a cat into a horse, or of Macbeth’s three witches standing around the cauldron while chanting, “Eye of newt and toe of frog, wool of bat and tongue of dog…” But magic has nothing to do with the supernatural. True magic comes from within ourselves.

It can only work within the boundaries of natural law, but it can seem to happen miraculously, simply because most people don’t understand the extent of the natural laws that we are dealing with. The fundamental idea behind this is that the thoughts you put out into the cosmos are a form of energy, and this attracts other energy in many forms. Your brain is like a radio beacon that is constantly sending out messages…and the universe (or the gods) receive those messages and transmit a reply back to us in one form or another.

Thoughts are energy, and words are powerful. These are two truths that are the basis of spell work. There is a natural law that states that on a metaphysical level, like attracts like. By visualizing an object and affirming to yourself that you want this item to manifest in your life, you are sending a clear message to the universe and to your subconscious as to what you want…and the cosmos will listen…and a corresponding image to the one you sent out will soon find its way to you. What we send out in thoughts and words, we attract to ourselves. What you think and what you say has more power than you can imagine. This is a type of magic in itself.

We use this type of “spell” all the time, mostly without realizing it. How often do you say to yourself or others, “I’m always broke, there’s just never enough money to go around!” And what’s the result? That’s a form of magic that you are working against yourself every day.

Some other examples that I hear people say are: “As soon as I stop dieting, I put weight back on,” and “My car is always breaking down.” In this article, we will be looking at using this same principle, but we will turn it around so that this form of magic works for us to enhance our lives.

Magic is a natural process that can be easily accomplished. It is a wonderful demonstration of the power that we each have to bring about change in our lives, and in our world around us. The life energy within us, and the universal forces that surround us, are energies of specific vibrations. In order to create magic, we simply need to attune with the vibrations of what we desire, and we need to know how to send the message of our needs to our subconscious and the universe.

Spells are practical tools that help us to attune with our desires, and then, in conjunction with our will, we direct this power inwards and outwards to ensure manifestation. As Aleister Crowley said… “Magic is the Science and Art of causing Change to occur in conformity with Will.” The subconscious mind is the source of the personal power used in magic. And spells are an effective way to convey messages to the subconscious because spells incorporate symbols – and symbolism is the language of the subconscious.

Know that words have power. And when words are used in conjunction with symbols, then the results are magical!

In the book “Myth, Religion, and Mother Right

“, the author J.J. Bachofen eloquently describes the power of symbolism: “Human language is too feeble to convey all the thoughts aroused by the alternation of life and death and the sublime hopes of the initiate. Only the symbol awakens intimations; speech can only explain. The symbol plucks all the strings of the human spirit at once; speech is compelled to take up a single thought at a time. The symbol strikes its roots in the most secret depths of the soul; language skims over the surface of the understanding like a soft breeze.

The symbol aims inward; language outward. Only the symbol can combine the most disparate elements into a unitary impression. Language deals in successive particulars; it expresses bit by bit what must be brought home to the soul at a single glance if it is to affect us profoundly. Words make the infinite finite, symbols carry the spirit beyond the finite world of becoming into the realm of infinite being.”

From what we have described so far, I’m hoping that you now realize that magic comes from within. And the more energy that you put into creating a spell, the better the result will be. For a spell to be effective, you cannot simply say words from a spell book and hope for the best, you have to know how to put power into the spell.

The spell is not the magic, it is only by putting power into a spell that you create the magic.

Stats
Archives
Breadcrumbs
If you lose your way, here is a trail of breadcrumbs showing where you've been here on the Book of Shadows... Book Of Shadows > Blog Page > Basic Concepts > True Magick
We use cookies to ensure that we give you the best experience on our website. If you continue to use this site we will assume that you are happy with it.Ok