Ritual To Become A Werewolf 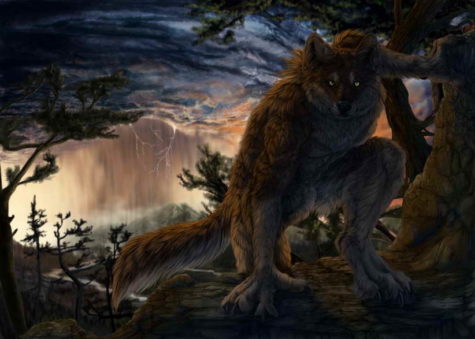 This spell is dangerous on many levels. First, it calls for the use of herbs that are poisonous, and possibly illegal. Secondly, it calls for whirling around with a pot of smoking hot herbs over your head. Thirdly, evil spirits are in and of themselves dangerous.

Drawing a circle from seven to nine feet in radius, in the center of which a wood fire is kindled- The wood selected being black poplar, pine or larch never ash. A fumigation in an iron vessel, heated over the fire, is then made out of a mixture of any four or five of the following substances:

As soon as the vessel is placed over the fire so that it can heat, the person who would invoke the spirit that can bestow upon him the property of metamorphosing into a wolf kneels within the circle, and prays a preliminary impromptu prayer. He then resorts to an incantation.

“Hail, Hail, Hail, great wolf spirit, Hail!
A boon I ask thee, mighty shade.
Within this circle I have made.
Make me a werewolf strong and bold.
The terror alike of young and old.
Grant me a figure tall and spare;
The speed of the elk, the claws of the bear;
The poison of snakes, the wit of the fox;
The stealth of the wolf, the strength of the ox;
The jaws of the tiger, the teeth of the shark;
The eyes of a cat that sees in the dark;
Make me climb like a monkey, scent like a dog;
Swim like a fish, and eat like a hog.
Haste, Haste, Haste, lonely spirit, Haste!
Here, wan and drear, magic spell making,
Findest thou me – shaking, quaking.
Softly fan me as I lie.
And thy mystic touch apply.
Touch apply, and I swear that when I die,
When I die, I will serve thee evermore,
Evermore, in grey wolf land, cold and raw.”

The incantation concluded, the supplicant then kisses the ground three times, and advances to the fire, takes off the iron vessel, and whirling it smoking round his head, cries out;

The trees begin to rustle, and the wind begins to moan, and out of the sudden darkness that envelops everything glows the tall, cylindrical, pillar-like phantom of the Unknown, seven or eight feet in height. It sometimes develops further, and assumes the form of a tall, thin monstrosity, half human and half animal, grey and nude, with very long legs and arms, and the feet and claws of a wolf, but surrounded with the hair of a women, that falls about its bare shoulders in yellow ringlets.

It has wolf’s ears and a wolf’s mouth. Its aquiline nose and pale eyes are fashioned like those of a human being, but animated with an expression too diabolically malignant to proceed from anything but the super-physical. It seldom ever speaks, but either utters some extraordinary noise-a prolonged howl that seems to proceed from the bowels of the earth, a piercing, harrowing whine, or a low laugh of hellish glee, any of which sounds may be taken for its assent to the favor asked.

It only remains visible for a minute at the most, and then disappears with startling abruptness. The supplicant is now a werewolf. He undergoes his first metamorphoses into wolf form the following evening at sunset, reassuming his human shape at dawn; and so on, day after day, till his death, when he may once more metamorphose either from man form or wolf form, or vice versa, his corpse retaining which ever form assumed at the moment of death. As far as I know from this process once a werewolf always a werewolf is an inviolable rule.

From: Werwolves by Elliott O’Donnell

Stats
Archives
Breadcrumbs
If you lose your way, here is a trail of breadcrumbs showing where you've been here on the Book of Shadows... Book Of Shadows > Blog Page > Dark Magick > Ritual To Become A Werewolf
We use cookies to ensure that we give you the best experience on our website. If you continue to use this site we will assume that you are happy with it.Ok