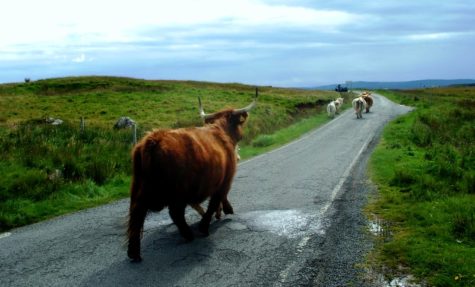 Lead all healthy animals three times around the perimeter of their field, barn or home, always in a sunwise direction. The person leading the parade carries a lit torch. The person bringing up the rear holds an open padlock in one hand, the key in the other hand. After the third round, the animals are lead back into the barn.
Turn the key in the lock. Throw the key into a river or stream, while preserving the now permanently locked padlock.

This blessing spell for livestock is meant to be performed on St George’s day (April 23 by the Julian calendar, or May 6 by Gregorian calendar) . 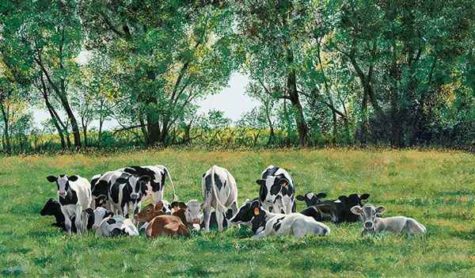 Preserve a palm blessed on Palm Sunday (If this isn’t available or appropriate you may substitute a sacred protective plant, such as wormwood or rosemary.)

Place this before a sacred image, together with two whole raw eggs and a pot filled with raw barley.

Light candles before the image. (Some versions of this spell specify a church candle.) Use the flame from a candle to light a torch.

Group all the animals to be protected in a circle.

One person circles around the animals carrying the torch, while a second person sprinkles Holy Water, or another protective water formula onto the animals, using the palm frond, rosemary or wormwood plant.

The animals are then driven to pasture by slapping them with the palm frond, rosemary, or wormwood plant.

When this is complete, throw the palm frond plant into running water. Sow the barley in the ground, and break the eggs on the ground away from your property.

Found in: Element Encyclopedia of 5000 Spells 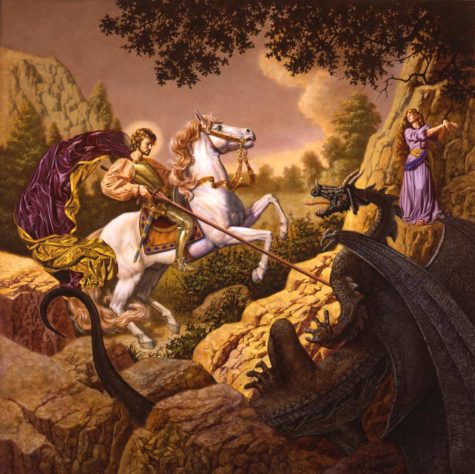 Saint George’s Eve is an extremely potent night for fertility rites. Crusaders encountered Saint George in Semitic West Asia and brought him home to Europe, where he is most famous for killing the dragon. Or did he? And why is he so helpful to women who wish to conceive? Some believe Saint George to be Baal in disguise.

Baal, Semitic weather deity and bane of the biblical prophets, exemplifies male thunder gods who rain down fertility on a parched region. The image of the dragon or great snake is often used to represent menstruation, the monthly heartache of women wishing but failing to conceive.

Women once flocked to a Syrian shrine devoted to Saint George. Its attendant priests developed such a reputation for working miracles of conception that suspicious husbands soon forbade their wives to go, preferring no children at all to the “miracle” children.

There’s no need to discover the ruins of this shrine. St George can assist your quest in the privacy of your own home.

Hang a new white nightgown from a fruitful tree on Saint George’s Eve. Leave it overnight. Inspect the garment in the morning. If any living creature is found within it, the woman can expect to conceive before next Saint George’s Day.

To activate the spell put the nightgown on immediately. Having sex while wearing it wouldn’t hurt either.

The most common form of life discovered in the nightgown is a bug or worm. Should you discover a snake wrapped up in your clothing, this is a powerful blessing and promise. A variation of the spell from Kurdistan actively seeks the snake’s blessings.

It is as follows:

Lay your nightgown at the foot of a tree or in its branches in an area known to be infested with snakes, the more venomous the better. Leave it overnight. Return to get the clothing the following day. If a snake is sitting on, or is in any way touching your nightgown, you should be pregnant within the year.

Take the clothing (but not the snake!) home, put it on and make love without laundering it first.

Saint George’s Day is celebrated on 23 April, the traditionally accepted date of Saint George’s death in AD 303. For Eastern Orthodox Churches which use the Julian calendar, 23 April corresponds to 6 May on the Gregorian calendar. 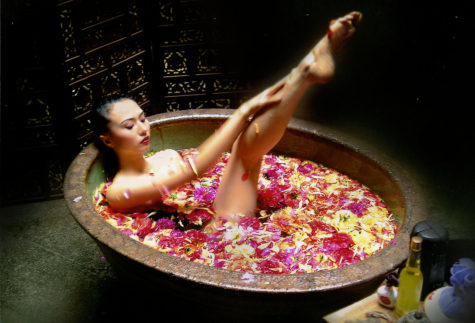 Flora is the Roman spirit of flowering plants and, by extension, of fertility and the life-force. Her festival, the Floralia, once began April 27th and continued for six days of revelry, especially by women of all ages celebrating their own bodies and natural beauty. The festival was celebrated in the nude until the third century CE, when Roman authorities ordered that revelers be clothed. The festival held out in that form for one more century until all pagan festivals were banned. Vestiges survive in May Day celebrations.

Just as every blossom is unique, so is every body. Flora encourages one to cherish one’s own beauty without comparison to any other. This spell is particularly potent if timed to coincide with Flora’s old festival but may be cast at anytime.

Fill your bathtub with as many fresh flowers as possible, especially Flora’s favorite, beautiful, transient bean blossoms. Enter the bath and understand that you too are among Flora’s unique and perfect blossoms.

The Floralia – the festival of Flora, Roman goddess of fruitfulness and flowers – is celebrated April 28 thru May 1st. Here’s a nice group ritual, it can be modified if you are a solitary practitioner. 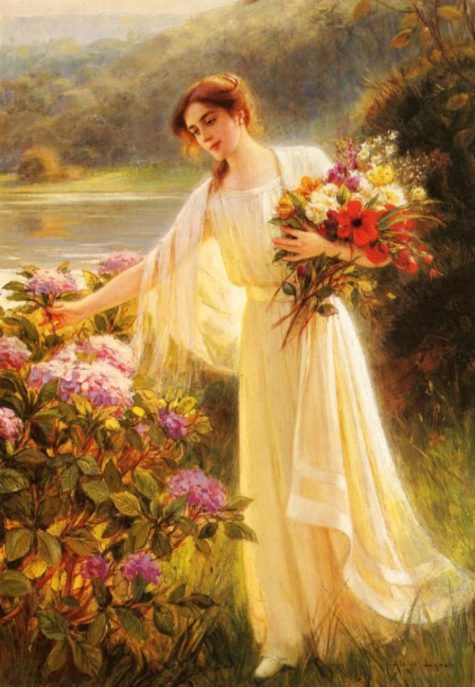 Upon a cloth of pink set a pitcher of water, pots of earth, flower seeds, incense of flowers, a bowl of beans, and many fresh flowers should be strewn around the room. The candles of Walpurgisnacht (if you have been observing it) should remain and be lit, and a sixth added to them, for Odhinn’s journey continues even as we celebrate Floralia.

Hail Flora, Lady of Beauty!
We must have not only our bread,
And our work, and our discipline,
But we must also have beauty in our lives,
That we may never become mere worms,
Measuring out our dull grey lives,
Never thinking to look around
And see the great beauty
That the Gods have made for us.
Let us look upon their gifts
And see in that loveliness
A measure of their love for us.
Hail Flora, who lights up our eyes!

Oh, She will bring the buds in the spring,
And laugh among the flowers.
In summer’s heat Her kisses are sweet,
She sings in leafy bowers.
She cuts the cane and gathers the grain
When fruits of fall surround Her,
Her bones grow old in winter’s cold,
She wraps Her cloak around her.

(All come forward and plant flower seeds in the pots of earth, which are afterwards carried outside and transferred to the garden. As they plant, they say, “I plant beauty in my life,” and say what sort of beauty they hope to see. The pots are watered, and the rest of the water is poured out as a libation for Flora. The rest of the day is spent adding beauty to the House.)

Found in: Pagan Book of Hours