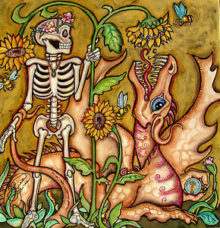 Do the dead rest easy? Flowers and flowering shrubs may be planted on the grave to serve as barometers. Allegedly if the flowers thrive and bloom, there’s no need to worry about whoever’s in the grave. Of course some plants are considered better barometers than others. Marjoram is believed to provide a good guarantee – if it thrives on a grave, the person within is certain to be content.

Other grave site plantings include the following:

Plant Aloe Vera on the grave site in order to soothe the deceased, ease any sense of loneliness or abandonment, and prevent their longing for the living.

A carpet of chamomile planted over a grave encourages the dead to sleep and also eases their passage to the next realm.

Cover graves with a carpet of daisies and blue bells to bring peace to the deceased and joy to the bereaved, and to invite the presence of benevolent guardian spirits.

Plant rowan trees in the cemetery, especially overlooking graves, to watch over the spirits of the dead.

To encourage the dead to sleep peacefully and deeply, strew wild poppy seeds throughout the cemetery.

Asphodel is allegedly among the favored foods of the dead. Asphodel is sometimes planted on graves, however the legend is also taken literally. Prepare asphodel – it’s typically roasted – and leave it atop a grave to comfort and satisfy the deceased within.

Tansy is described as an herb of life everlasting. It allegedly comforts the bereaved while assuring the dead that they will not be forgotten. 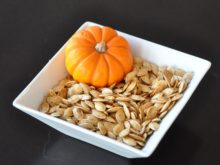 This particular spell was in common use as early as the 1920’s and quite possibly before. This ritual confers a double blessing since it acts as a spiritual cleansing in addition to attracting wealth and prosperity to the individual that performs it.

Sit in a place where you can meditate quickly for a few minutes. Open your bag of pumpkin seeds and count out 9 seeds. Eat the first seed. You may choose to break the seed open with your teeth and eat the soft inner seed, or you can eat the salty hard shell as well. Slowly chew the first seed and wash it down with a drink of cool water. Repeat the process until you consume all nine seeds.

After you swallow the last seed say to yourself aloud or silently:

May the seeds of this holy gourd
cleanse me of all negativity
and fill my life with wealth and blessings.

You will be surprised at how effective something so simple can be! I have heard of people winning jackpots at casinos and encounter long lost friends after performing this easy ritual. 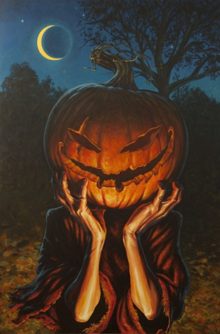 As you carve your pumpkin this year,
this blessing can add your magical intention:

“May the light of this lantern frighten away all evil spirits who wish to do as harm and light the way for all good spirits and ancestors who wish to visit us this night.” 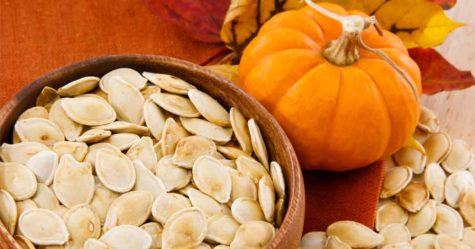 On the Full moon during the month of October or November is the time to perform this spell.

On each of your seeds write one word that is directly related to your wish or desire. i.e., If you want to financial gain, you can right attain, money, abundantly… or something like that on your seeds.

At the time of the full moon, take your seeds out to the area you have chosen. Hold your seeds in your hand and make your wish. It helps to decide what you want to say before you begin. You can use a little rhyme or whatever you deem appropriate.Toss your seeds into the water and allow them to float away.

Connect With The Spirit World 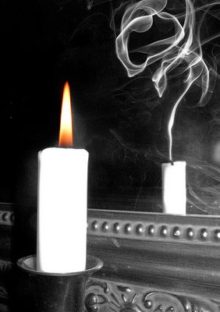 On the Eve of Samhain, (the night before Halloween), get a white candle, matches and mirror for this spell. At dusk, go to a haunted area or a place you feel the spirits are especially powerful. Make contact by walking about and allowing your mind to roam. Light your white candle and stare into it saying:

Clear as midnight,
the spirits are bright.
Ghostly curiosity
brings you to me.

As a form takes shape,
I am not asleep.
Spirit awake,
take your shape.

Let the candle flicker. Glance into the mirror and look past your shoulder. Do you see mists or lighted balls in the reflection? This is how ghosts typically appear. Return to the area on the next three nights. Take some pictures. At home, place your mirror face down. Mirrors trap spirits. Some spirits will track you as you search for their reflections. If you want your those to leave, just say so. Follow this up by putting a broom over your transom and burning sage.

This lovely little spell is great for Samhain.
It would also be appropriate if you celebrate The Day of the Dead.

It is simple but works wonders. It can also be used to protect and cast circles, for guidance, and most of all comfort. It gives me the warmth and guidance I seek WITHOUT fail!! 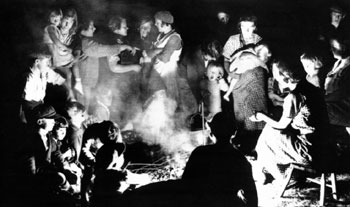 I call forth from space and time.
Ancestors of my blood line.
Gather around on this holy night.
Watch over me till morning light.

Blood of my blood,
I set you free,
Thanking you for coming,
Until next time,
blessed be!!

Inviting Your Ancestors In 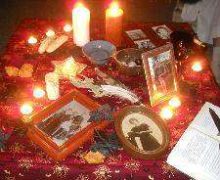 For this spell, gather at your altar or sacred space some black cloth, a black candle, a bowl of water, a feather, a citrine, amethyst or lapis lazuli crystal, and photos and mementos from your loved ones who have passed beyond.

Place the black cloth on your altar or on the floor. Position the feather in the east, the candle in the south, the bowl of water in the west, and the crystal in the north. Arrange the photos and other objects in the middle as you chant or whisper:

“May my loved ones touch me again-in the kiss of a breeze, in the light of candle flame, in the laughter of the rain, in the ground beneath my feet. Spirits of air, fire, water, earth, bring my loved ones close again.”

You may want to hold a photo or object and take time to feel the spirit of your loved one.

Posted in Day of the Dead Magick and Rituals, Seasonal Spells, Spells For The Dead | Tagged Ancestors, Communicate With Spirits, Ghosts | Leave a comment 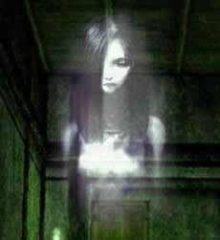 Samhain (aka Halloween) is a magical time of the year. It has Celtic roots. It marks the beginning of the “dark” part of the year. It’s also the moment when the “veils” between the realms of the living and dead are “thinned” making communication easier.

You can actually invoke blessings from “hungry” ghosts who are without any family or friends, and that have long been forgotten. You’ll love the little strokes of “good luck” and other goodies you begin to receive.

Beginning 1 or 2 weeks before October 31, (Samhain/Halloween), here’s what to do:

Every night before you go to bed, place a glass of milk and a plate of barley outside your home under the stars.

This will ease lonely ghosts’ “hunger” for attention. It will prevent any mischief, and will bring blessings, luck, and fortune into your life during the next week. 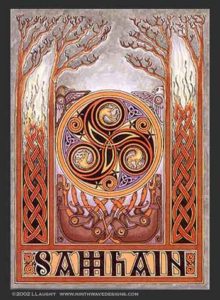 Place upon the altar apples, pomegranates, pumpkins, squashes and other late autumn fruits. Autumn flowers such as marigolds and chrysanthemums are fine too. Write on a piece of paper an aspect of your life which you wish to be free of: anger, a baneful habit, misplaced feelings, disease. The cauldron or some similar tool must be present before the altar as well, on a trivet or some other heat-proof surface (if the legs aren’t long enough). A small, flat dish marked with an eight-spoked wheel symbol should also be there.

Prior to the ritual, sit quietly and think of friends and loved ones who have passed away. Do not despair. Know that they have gone on to greater things. Keep firmly in mind that the physical isn’t the absolute reality, and that souls never die.

Arrange the altar, light the candles and censer, and cast the Circle of Stones. Recite a Blessing Chant, and invoke the Goddess and God in any way that feels right to you.

Lift one of the pomegranates and, with your freshly-washed white-handled knife, pierce the skin of the fruit. Remove several seeds and place them on the wheel-marked dish. Raise your wand, face the altar and say:

On this night of Samhain I mark your passing,
O Sun King, through the sunset into the Land of the Young.
I mark also the passing of all who have gone before,
and all who will go after. O Gracious Goddess,
Eternal Mother, You who gives birth to the fallen,
teach me to know that in the time of the greatest
darkness there is the greatest light.

Taste the pomegranate seeds; burst them with your teeth and savor their, bittersweet flavor. Look down at the eight-spooked symbol on the plate; the wheel of the year, the cycle of the seasons, the end and beginning of all creation.

Light a fire within the cauldron (a candle is fine). Sit before it holding the piece of paper, gazing at its flames. Say:

Wise One of the Waning Moon,
Goddess of the starry night,
I create this fire within your cauldron
to transform that which is plaguing me.
May the energies be reversed:
From darkness, light!
From bane, good!
From death, birth!

Light the paper in the cauldron’s flame and drop it inside. As it burns, know that your ill diminishes, lessens and finally leaves you as it is consumed within the universal fires.

If you wish, you may attempt scrying or some other form of divination, for this is a perfect time to look into the past or future. Try to recall past lives too, if you will. But leave the dead in peace. Honor them with your memories but do not call them to you. Release any pain and sense of loss you may feel into the cauldron’s flames.

Works of magic, if necessary, may follow. Celebrate the Simple Feast. The circle is released.

From SimpleMagick.com
Note: More information can be found here – Samhain (A post on The Pagan Calendar)

Spell to Speak With Spirits of the Dead 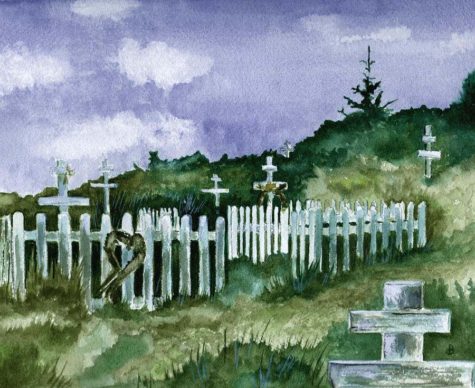 To speak to spirits that have passed on, gather together the following:

Using these materials, create an incense for burning. This incense, when burned in a cemetery, will allow you to speak to the dead while also protecting you from malevolent spirits.

Posted in Day of the Dead Magick and Rituals, Seasonal Spells, Spells For The Dead | Tagged Ancestors, Cemetery, Communicate With Spirits, Ghosts, Graveyard | Leave a comment
1 2 Next »