Ritual For The Gift Of Lycanthropy 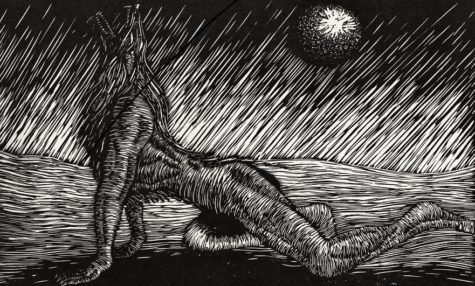 This spell is dangerous on many levels. First, it calls for the use of herbs that are poisonous, and possibly illegal. Secondly, it calls for applying those dangerous herbs to the body, and who knows what kind of a health issue that may cause. Thirdly, it calls for going out in the middle of the night, alone, when the moon is dark to what could easily be a dangerous place, populated by wild and not very friendly animals. Finally, evil spirits are in and of themselves dangerous.

There are conditions of mind essential to those who would successfully practice these rites. It is necessary that the person desirous of acquiring the property of lycanthropy should be in earnest and a believer in those super-physical powers whose favor he is about to ask.

Such an individual must betake himself to a spot remote from the haunts of men. The powers to be petitioned are not to be found promiscuously anywhere. They favor only such waste and solitary places as the deserts, woods, and mountain tops. The locality chosen, the candidate must next select a night when the moon is new and strong.

He must then choose a perfectly level piece of ground, and on it at midnight, he must mark, either with chalk or string, a circle of not less than seven feet in radius, and within this, and from the same center, another circle of three feet in radius.

Then in the center of this inner circle he must kindle a fire, and over the fire place an iron tripod containing an iron vessel of water. As soon as the water begins to boil the would be lycanthropist must throw into it handfuls of any three of the following substances:

While repeating the following incantation:

The supplicant then takes off his vest and shirt and smears his body with the magic salve. Then he binds round his loins a girdle made of wolf’s skin, and kneeling down within the circumference of the first circle, waits for the advent of the Unknown.

When the fire burns blue and quickly dies out. The Unknown is about to manifest itself; if it does not actually appear it will make its presence felt. The spirit advent may be; a deep unnatural silence immediately proceeding it sometimes, sometimes crashes and bangs, groaning and shrieking, herald its approach. When it remains invisible its presence is indicated and accompanied by a sensation of abnormal cold and the most acute terror. It is sometimes visible in the guise of a huntsman sometimes in the form of a monstrosity, partly man and partly beast, and sometimes it is ill defined and only partially materialized.

To what order of spirits it belongs is, of course purely a matter of conjecture. It is some malevolent, super-physical, creative power, such as, participated largely in the creation of theirs and other planets. It is not the Devil. It is difficult to say to what extent. The Unknown is believed to be powerful by those who approach it for the purpose of acquiring the gift of lycanthropy; it is not ascribed to be any supreme power, but is regarded as merely a local spirit, the spirit of some particular wilderness or forest.

From: Werwolves by Elliott O’Donnell