The Chant of the Year 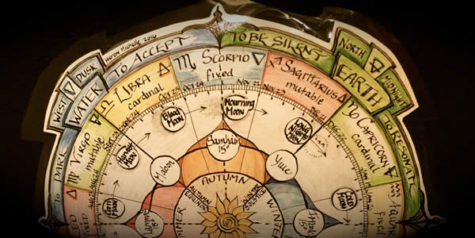 The following is of archaic Celtic origin. On the surface it is a triple recital of the thirteen months of the lunar year. Each word, however, is the name of one of the sacred trees, which in turn each have deep philosophical and magickal implications. Additionally, the thirteen, taken in sequence, tell in rich detail the life of the Sacred King and the archaic Legend of the Goddess.

All Witches should know or be strongly encouraged to study and research the hidden meanings behind this, working from the material provided by the poet Robert Graves (The White Goddess)

Very powerful when done as a group, this chant can be done by the solitary practitioner as well. Provided here are the instructions for a group ritual, which can then be adjusted to suit an individual practice.

Prior to commencing the chant, everyone gathers in the circle, with the implications of the chant being described by whoever is leading the ritual. Pause in silence for a period of thirteen heartbeats while everyone meditates on what has been said, then the leader of the ritual intones the words of the chant loudly and in a rich voice. The chant is recited with all in the circle responding, three or nine times, as deemed appropriate. The chant is closed with the final invocation. If available, incense may be thrown into an incense brazier at the close of the chant. Everyone should remain silent for a while afterwords.

Here is the chant, which is repeated by all in the circle, slowly, and sounding each letter long and resonantly:

Repeat three or nine times as desired. I personally like the idea of repeating each individual name three times, and then repeating the entire sequence three times (which adds up to nine).

The leader of the circle closes with the following calling:

From: A Grimoire of Shadows

Stats
Archives
Breadcrumbs
If you lose your way, here is a trail of breadcrumbs showing where you've been here on the Book of Shadows... Book Of Shadows > Blog Page > Chanting Spells > The Chant of the Year
We use cookies to ensure that we give you the best experience on our website. If you continue to use this site we will assume that you are happy with it.Ok