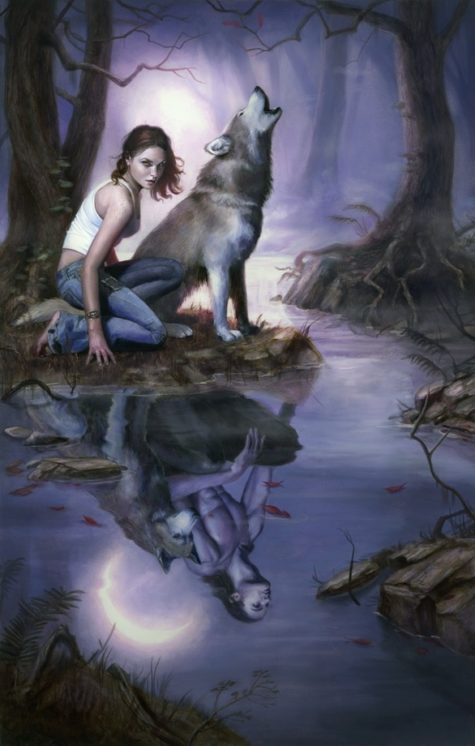 A Norwegian or Swedish peasant when he wishes to become a werewolf, kneels by the side of a lycanthropous stream at midnight, having chosen a night when the moon is in the full, chants these words:

The supplicant then strikes the banks of the river three times with his forehead; then dips his head into the river thrice, at each dip gulping down a mouthful of the water.

Concludes ceremony, he has become a werewolf, and twenty-four hours later will undergo the first metamorphosis.

Lycanthropous water is said, by those who dwell near to it, to differ from other water in subtle details only, detail that would, in all probability, escape the notice of all who were not connoisseurs of the superphysical.

A strange, faint odor, comparable with nothing, distinguishes lycanthropous water; there is a lurid sparkle in it, strongly suggestive of some peculiar, individual life; the noise it makes, as it rushes along, so closely resembles the muttering and whispering of human voices as to be often mistaken for them; whilst at night it sometimes utters piercing screams, and howls, and groans in such a manner as to terrify all who pass near it.

Dogs and horses, in particular, are susceptible to its influence and they exhibit the greatest signs of terror of the mere sound of it.

From: The Werewolf Page

Stats
Archives
Breadcrumbs
If you lose your way, here is a trail of breadcrumbs showing where you've been here on the Book of Shadows... Book Of Shadows > Blog Page > Dark Magick > Lycanthropous Water Ceremony
We use cookies to ensure that we give you the best experience on our website. If you continue to use this site we will assume that you are happy with it.Ok