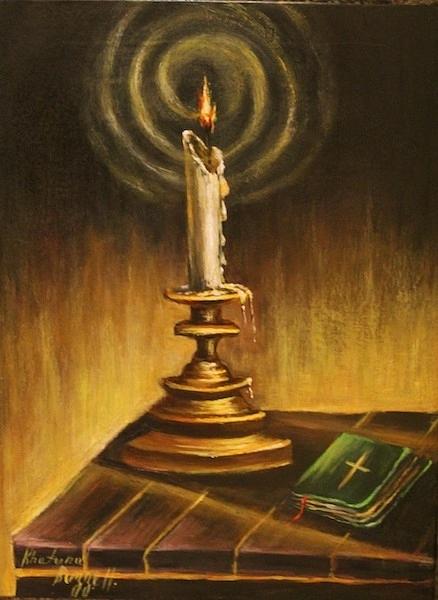 The use of coins in Peaceful Home spell-work has a long basis in history, as a matter of fact. One old spell for promoting peace in the home consists of dressing a blue candle with pennyroyal oil and setting it on a paper on which has been written the name of everyone in the household, crossed by the entire text of the 23rd Psalm of the Bible.

Four coins — usually four nickels or four dimes — are placed around the candle in the form of an equal-armed cross, oriented North, South, East, and West.

The coins that surround the candle should all be of the same denomination. Back in the days when women often did not have jobs outside the home and the husband brought home all the pay, it was said that the four coins should be ones that were freely given by the husband to his wife. Nowadays, when most women have their own jobs, that is probably not so important, but the idea of the four coins remains.

Old spells like this can be adapted for use by people who live in apartments, but how they do so is going to be unique to their own situation. In any case, it is important to properly dispose of the ritual remains of the spell by laying them in the corners.

Here’s the 23rd Psalm, King James version, if you need it:

The Lord is my shepherd; I shall not want. He maketh me to lie down in green pastures: he leadeth me beside the still waters. He restoreth my soul: he leadeth me in the paths of righteousness for his name’s sake. Yea, though I walk through the valley of the shadow of death, I will fear no evil: for thou art with me; thy rod and thy staff they comfort me. Thou preparest a table before me in the presence of mine enemies: thou anointest my head with oil; my cup runneth over. Surely goodness and mercy shall follow me all the days of my life: and I will dwell in the house of the Lord for ever.

Stats
Archives
Breadcrumbs
If you lose your way, here is a trail of breadcrumbs showing where you've been here on the Book of Shadows... Book Of Shadows > Blog Page > Candle Magick > Peaceful Home Candle Spell
We use cookies to ensure that we give you the best experience on our website. If you continue to use this site we will assume that you are happy with it.Ok