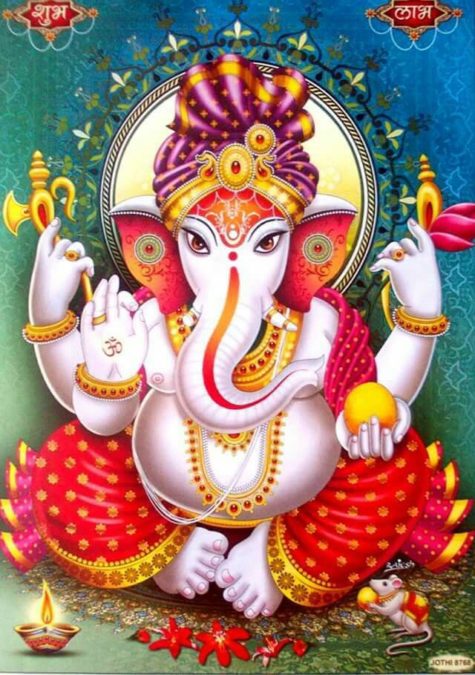 If you are seeking new opportunities and wish to break down any obstacles that stand in your way, a Ganesh Road Opener Ritual just may be your answer!

Ganesha is India’s cutest god. He has the head of an elephant on which is perched a dainty tiara, four pudgy hands joined to a sizeable belly with each hand holding its own symbolic object. One has a trishul, or a trident, the second, an ankush, or goad made from his very own broken tooth, the third hand elegantly holds a lotus and the fourth a rosary (which is sometimes replaced by modaks – his favourite sweet). His appetite for sweets is legendary and offerings of them are often left at his shrine.

Ganesha is famous not only for being a trickster and for his sense of humour, but equally for his wisdom. He is the son of Shiva (Destroyer in the Hindu Holy Trinity of Creator-Preserver-Destroyer) and Parvati (Shiva’s consort).

The chubby, gentle, wise, elephant-headed Ganesh, or Ganesha, is one of Hinduisms most popular deities. He is the remover of obstacles, the deity whom worshippers first acknowledge when they visit a temple. He is also patron of letters and of learning; he is the legendary scribe who, using his broken tusk, which he often holds, wrote down parts of the Mahabharata epic.

He is typically honored with hibiscus flowers.

Traditionally, Ganesh is petitioned at the start of new ventures. If you are dreaming of doing something new such as embarking on a new job, a new relationship or simply just want more prosperity in your life then a ritual to Ganesh may serve you well. 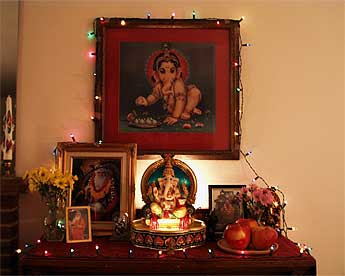 To perform a Ganesh Road Opener Ritual, print out a picture of Ganesh and place it on an altar. You will also need a yellow candle, candy, a simple plate, a bowl of fresh water and some fresh flowers. Begin by cutting the flowers and placing them in the bowl of fresh water. I prefer to cut the flowers down to simply the flower tops and allow them to float in the water.

You will also want to add a couple drops of Ganesh Oil into the water as you do this. On your plate, place any items that reflect what you wish to accomplish. For example, you can place your business cards, some new silver coins, a job application, a prayer, petition, photos or even an important business contract. Get your yellow candle and anoint it with Ganesh oil, drawing the oil up the candle towards the wick.

Place the candle in an appropriate candle holder and then put it on the plate with your items. When you are ready, light the candle and say a prayer. When the candle has completely burned down, take all the remains and bury it in a flower pot.

Here is the easiest and most effective way to ask Ganesh for help:

That’s it! It’s that easy. When you have done this once, it is said that you will then have a permanent and ongoing relationship and connection with Ganesh. Speak to Him anytime you wish, as many times as you wish. It does not have to be a formal meditation. Take a moment in your day, if you feel the need, close your eyes and speak to him using the above method. 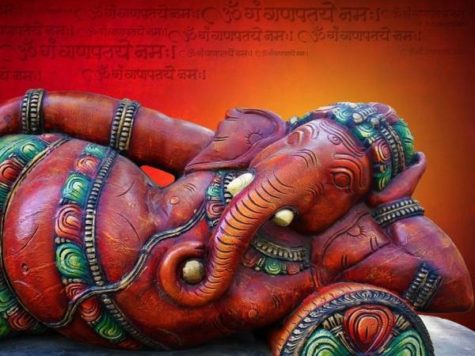 Invoking Ganesh With A Mantra

Another way that you can invoke the power of Ganesh is by repeating one of his mantras. In the simplest sense, mantras are ancient Sanskrit words of power. Each syllable of a mantra resonates a certain vibration. Mantras are used in meditation, to focus the mind, but they are also used to invoke the blessing of a Deity. What is happening when you repeat a mantra over and over, is that you are matching your own vibrational frequency to that of the mantra and its purpose (wealth, health, success, knowledge, etc.). Each of the Hindu Deities has their own mantra or mantras, which invoke the type of energy that the Deity represents.

This is one of the most popular and most powerful mantras to invoke the assistance of Ganesh and to remove the obstacles in your life. To work with it, simply repeat it aloud/ or in your head if you’re sat at work or with people, (chant) over and over again, or repeat it silently to yourself. You will see the most benefit from this practice if you do it daily, for at least 4-6 weeks. It may not take that long to see the benefits, but you will come to realize the full power of the mantra if you continue with its practice. I can can say from personal experience that this mantra is powerful and Ganesh has blessed me many times, removing many obstacles from my own life, and opening up new opportunities.

The pronunciation is also pretty easy:

Repetition of this mantra over and over again brings peace, and is designed to help remove anything that might be blocking your progress. You can use the whole mantra, or just the bija or seed sound for the Ganesh Mantra, which is “Gam” and sounds like “gum.”

Stats
Archives
Breadcrumbs
If you lose your way, here is a trail of breadcrumbs showing where you've been here on the Book of Shadows... Book Of Shadows > Blog Page > Prayers and Invocations > Ganesh Road Opener Ritual
We use cookies to ensure that we give you the best experience on our website. If you continue to use this site we will assume that you are happy with it.Ok