Magick Circles, Why Use Them? 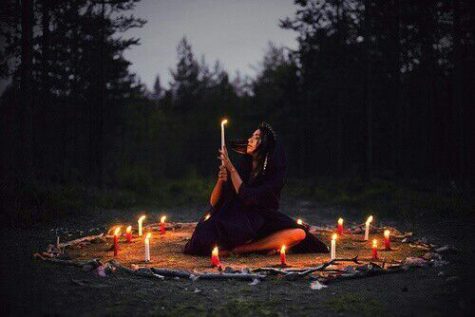 They say that the longest journey begins with a single step. So, too, the exploration of Magickal studies begins with a single step. Though the first step in a physical journey is often self-evident, the First Step on a Magickal journey is often not quite so clear. While formally organized groups often have a path of lessons to instruct newcomers, the solitary or isolated student is often left standing in perplexity on this broad plain of knowledge, wondering just where in the heck to begin. And wondering, too, if it’s “okay” to start just anywhere.

While it’s true that studies can begin in a direction that attracts you, the necessary first step must be learning to make psychic shields. There are “Things of the Dark” out there. There are any number of explanations for what these things might be– ghosts, demons, or simply uncontrolled urges of the subconscious mind. In truth, it doesn’t matter what they are. What does matter is that their effect is very real and unless they are put under your control, they will drag you over the borders of sanity into psychosis.

You are most vulnerable to them while you’re in an “open” trance or meditative state. That’s why the wise practitioner always begins by taking steps to define exactly what will be permitted through the portals of their “psychic shields”– no matter how simple the ritual. And this, in a nutshell, is what “protective magic” is about.

There are a number of ways to do this. The most common is to begin by drawing a circle (around a group or yourself) and invoking the one or more protective powers. Generally, this is done by candlelight, in front of an altar that holds certain magical objects. The circle may be further “secured” and “cleared” by using salt, salt water, rum, incense, or some other method. You may be wearing a special robe and will have taken a bath (or performed a cleansing ritual) earlier. The powers that protect you will be called on and then you will begin your ritual.

Is it psychological? Absolutely! Is there a reason why protection rituals always take this form? Positively! Let’s take a step back and see what you’re actually doing and how the process works– from a psychological standpoint– and how to use this knowledge to help you refine your circles to enhance your rituals.

Psychologists and psychics alike view the mind’s structure as a three-part entity: The ego (that which you think of as yourself), the superego (the “higher self”) and the Id (the child within). The Id is, in a sense, a computer. Like most computers, it operates on the “garbage in – garbage out” principle.

The bad news is that the Id can’t make a judgment as to whether or not this is a good idea. It only knows that it’s received these “instructions” and must carry them out. The good news is that you can actually program/reprogram this portion of your mind.

You begin programming this Internal Servant of yours by first drawing its attention to what you want done and then explaining what you need done in a simple and clear manner. Repeating the instructions in a chant help fix the goals for the Id– rhymed chants seem to be easier for it to process. Each time you perform the ritual and repeat the chant, the programming is strengthened. Never mind that your ego and superego understand that you’re going to program the child-like Id. It works just the same.

To direct the Id’s attention to the process, you first have to impress it. Using special tools and clothing alert it that something unusual is going on and that it must pay attention. Acquiring hard-to-obtain items, drawing symbols, performing a symbolic sacrifice (donating money, say, to a good cause) are all ways of reinforcing the Id’s impression that this ceremony is very special and that the result will be very powerful. Organized, meaningful symbols, speak to your subconscious mind in ways it understands, reinforcing the goals you have set.

Drawing the circle itself establishes boundaries within your environment (“The rest of the world can do what it likes Out There. All within this circle is in MY control!”). Purifying the circle and consecrating it (sprinkling water which has been blessed and salt added) further enforce your territory, defining the borders where you are “safe”. Nothing can enter this area except what you invite inside. You further tighten these borders by calling on certain powers.

You can call on any powers you like. Some use traditional Christian images. Others call up deities from the religion they are most comfortable with. And many people use the thought/image of a beam of light that represents either God/Goddess (whichever one they like) OR The power of light and life and goodness in the Universe.

The number of powers called as guardians varies. You may choose to invoke one powerful being to protect your circle. Or you might call on the Universal Being/Light AND four guardians (one for each quarter of the compass). A third approach is to use a guardian for the four quarters of the compass and no higher being. There is no “absolutely correct” system; the correct system is the one that YOU are comfortable with.

Take time to choose the guardians of your circle carefully. You should select guardians (gods or animals or some form of life) which have a deeper meaning to you and whose qualities are in harmony with your goals. For the new student, it’s best to have all your Powers and Guardians from the same belief system/religion/mythic universe so that the symbols will be consistent and not confuse the Id.

You CAN use people– saints, movie actors, figures from favorite books as guardians. DO, however, pick someone who’s dead or non-existent. The dead can’t argue with your interpretation of them, whereas the living may be highly offended to be approached as gods/ guardians).

As your studies continue, you will find that your totems or guardians change. This is to be expected; as you explore new realms in your studies, you may find you need guardians who deal with very specific areas to strengthen and guide you in these new fields.

But don’t make the mistake of assuming that you’ll become so powerful that you will never need the protection of the psychic shielding circle in some form. And don’t assume that you will not need a circle for “positive” magick such as healing. Open is open– and open is vulnerable. And circles strengthen and protect you by defining what psychological influences will be allowed to work with you.

NOTE: It is equally important to close your circle when you are complete. This can be accomplished in a variety of ways. Key elements are a statement of intent, for example: “The circle is open” and the releasing of the energy contained within the circle either by sweeping the perimeter, retrieving objects, or whatever feels appropriate.

Stats
Archives
Breadcrumbs
If you lose your way, here is a trail of breadcrumbs showing where you've been here on the Book of Shadows... Book Of Shadows > Blog Page > Basic Concepts > Magick Circles, Why Use Them?
We use cookies to ensure that we give you the best experience on our website. If you continue to use this site we will assume that you are happy with it.Ok