Today is a full moon – a perfect night for some Angel magic. 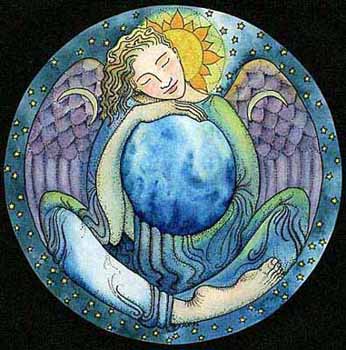 This spell can be said anytime. Works well by accentuating with a bell or any instrument that makes a high ringing sound… such as a wind chime. Ring the bell one time after each phrase. This can also be done in a group, where one person says a line, and then the line is repeated by the group, followed by the words “So shall it be!”

State your intention, and follow it up with each of the Angels listed below, and a simple affirmation of power. For example (I love my life. Ariel begins it. So shall it be!) Repeat until each angelic power has been invoked. This is a very powerful chanting invocation, you will feel the energy build as you do the spell.

Seal in the air with the sign of the equal-armed cross using your dominant hand.

Stats
Archives
Breadcrumbs
If you lose your way, here is a trail of breadcrumbs showing where you've been here on the Book of Shadows... Book Of Shadows > Blog Page > Angel Magick > Angel Magic Invocation Spell
We use cookies to ensure that we give you the best experience on our website. If you continue to use this site we will assume that you are happy with it.Ok