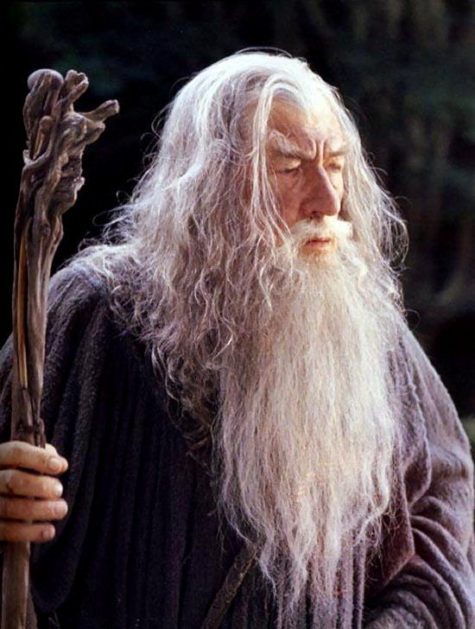 In an earlier post, I made the statement that Gandalf changed my life. Here is how that happened. I was working at for Sprint, on a terrible shift, doing work I detested, mostly on night shift, and in a deep and dark depression. After midnight, we usually watched movies between calls (which was allowed). One night someone brought in The Lord of the Rings.

I was thinking… “Oh God, not that again!” But there it was, nothing to do but watch it, so I did. And once again I got totally caught up in the drama. And once again I started to wish that life really was like an epic fantasy movie. And once again, I felt myself spiralling into that dark feeling of disappointment with myself and my life.

And then, Frodo said: “I wish the ring had never come to me. I wish none of this had happened.” Which really resonated with me, I was wishing lots of stuff had never happened to me too.

To which Gandalf replied:

“So do all who live to see such times. But that is not for them to decide. All we have to decide is what to do with the time that is given to us.”

He went on to say: “There are other forces at work in this world Frodo, besides the will of evil. Bilbo was meant to find the Ring. In which case, you were also meant to have it. And that is an encouraging thought.” But what I heard, that first part went straight to my heart. Something inside of me woke up. I could feel it stirring! It was as if he was speaking directly to me.

It occurred to me that I could decide what to do with the time that was given to me. That I could decide to live my life AS IF it was an epic fantasy movie. I could decide to be whoever it was that I wanted to be. And for the next several days – as we watched the rest of the trilogy – I mulled it over. I wondered who I would be if the Lord of the Rings was actually my “real” life… who was I in the movie? What part was I currently playing?

The answer was disconcerting to say the least. I came to the conclusion that I was “doing” life much the same as Denethor, Steward of Gondor. “Why? Why do the fools fly? Better to burn sooner than late, for burn we must. Go back to your bonfire! And I? I will go now to my pyre. To my pyre!”

If you don’t remember Denethor here’s the scoop on him: He’s a father, a good man, but he’s inexorably drawn to his own destruction because of his grief. He’s lost his son Boromir, and he almost lost his other son, Faramir. He’s lost his wife. He wasn’t the king of Gondor, only the steward…a caretaker. His city is under siege, his people are being slaughtered and he’s powerless to do anything about it. The situation is desperate. The armies of Sauron will come back. They will defeat civilization, and Denethor can’t see any way of stopping it. He can’t cope.

Ok, so I’m not a father, and I wasn’t in the situation he was in – but the grief was real, the feelings of loss and doom were real, I did feel powerless, and desperate, and unable to cope. And instead of standing my ground, instead of doing whatever could be done, I was plunging headlong into self destruction. Finding an almost sinful pleasure in being mean to myself, reveling in the self torture. Not even willing to allow the possibility of outside aid.

Now that I knew “who” I was in the movie, it was time to decide who I “wanted” to be in the epic fantasy adventure of my own life. I’ll blog that as a separate post. See it here.

Posted in Lord Of The Rings, Real Life, Who I Want To Be | Tagged me me me, movies I like