This so totally illustrates me!

Night of the Living Dead

Happy Halloween!
And to celebrate here is The Night of the Living Dead! The complete movie on video. I love these old zombie movies!

And how about this? Scientists have developed a cure for zombie cockroaches… I guess because we need more of them? Or is it because there really will be a zombie apocalypse and we’re going to need the cure for ourselves? And is it wasps who will turn us into zombies? Or scientists experimenting with them? I don’t know… what do you think?

Watch how jewel wasps turn cockroaches into “zombies” and find out about the antidote scientists have discovered.

For more info see this article at New Scientist 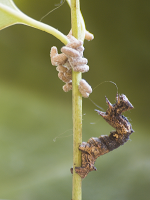 I know it sounds crazy… but it’s actually true!

The parasitoid wasp Glyptapanteles lays its eggs, about 80 at a time, in young geometrid caterpillars. The eggs hatch and the larvae feed on the caterpillar’s body fluids. When they are fully developed, they eat through the caterpillar’s skin, attach themselves to a nearby branch or leaf and wrap themselves up in a cocoon.

Having partially developed inside caterpillars, the larvae of the wasps manipulate their hosts into watching over them as a mother or bodyguard might.

The caterpillar, still alive, behaves as though controlled by the cocooned larvae. Instead of going about its usual daily business, it stands arched over the cocoons without moving away or feeding.

The caterpillar – now effectively a zombie – stays alive until the adult wasps hatch.

“We don’t know exactly what kills the caterpillars, but it is fascinating that the moment of death seems to be tuned to the duration of the wasp’s pupal stage,” says Arne Janssen of the University of Amsterdam.

Although Janssen and his colleagues do not know how the parasites make the caterpillars change their behaviour, they think that a few larvae in each brood may sacrifice themselves to help their brothers and sisters.

“If we dissect the caterpillars, we find one or two parasitoid larvae have stayed behind, even after the rest of the brood has emerged and formed cocoons,” says Janssen.

It could be that the larvae that remain in the host control its behaviour in order to make it protect the rest of the brood.

Cool huh? I found this at New Scientist, where you can read the entire article.