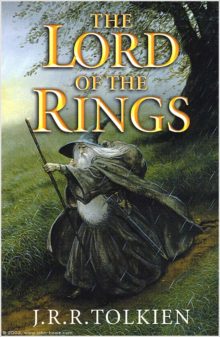 There has been so much going on with me since Jan 1st that I think it might take 4 or 5 blog posts just to get it all said! I don’t even know where to begin. I guess I’ll start with The Lord of the Rings – because this is the background for the stuff I’ve been excited about and doing since the New Year began.

I absolutely love that story! I first read it in 1969. And I can remember that my family was huddled around the TV or the Radio, I’m not sure which. They were all excited because this was the day that Neil Armstrong, aboard the Apollo 11 Lunar Lander, along with Buzz Aldrin, touched down on the surface of the moon. What was I doing? I was reading The Lord of the Rings. Frodo and Sam were just begining the treck through the swamp with Gollum leading the way. My dad was really aggravated with me because I was not the least bit excited that the “Eagle had Landed”.

I did pull myself away from the book long enough to hear those famous words, “That’s one small step for a man, one giant leap for mankind.” And then I was back in Middle Earth. We were doing a lot of traveling at the time, driving from Florida to Michigan and back again, and when we drove through wooded areas, I was convinced that I could see the places where hobbits and elves still lived. The secret magical places in forests and near streams called to me.

When I finished the last book, I turned right around and started reading them again. And then, I read it again.

Years later, when the Fellowship of the Ring came out, I went to see it at the theater with a friend of mine. It was terribly disconcerting having it just stop in the middle of the story. And on the way home, I found myself falling into a terrible funk because my life seemed so ordinary and so boring and so NOT adventurous or interesting in any way, shape, or form. I decided it might even be better for me to NEVER see another fantasy movie ever again – since none of it was real anyway and that was just going to upset me. I didn’t watch another fantasy movie for more than a year. I didn’t go and see the rest of the Trilogy when it came out. I didn’t read the book, or even think about it for quite a long time.

And then, during one of my darkest moments, when I was going through what could really be described as a journey through Mordor, the most amazing thing happened. Gandalf stepped in and changed my life.

Posted in Lord Of The Rings | Tagged books I read, me me me

Related Posts
Who Is Radagast The Brown?
Being Entish
Here’s a fun game!
3 am New Years Day
My Flickr Profile
More Posts
Ask The Plumber Dude