Filling In The Blanks 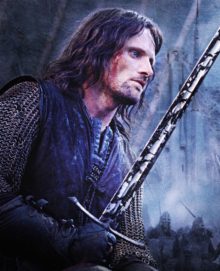 Over on the Prosperity Project, back in Jan of 2010, I uploaded a thing about Buffy, a sort of introductory story and I was talking about how interesting and informative it might be if we each wrote our own introductory story. Initially, I had the idea of also uploading a blurb about Aragorn, but it was too much. So I said to myself, I’ll just put that part of it here:

Here are the two descriptive paragraphs I found:

“In the Third Age, another tale may be heard, that of Aragorn son of Arathorn, the nine and thirtieth heir in the right line from Isildur. Descended from the faithful of Númenor and whose destiny it was to reclaim the kingship of the fractured realms of Arnor and Gondor.”

“His ways were hard and long, and he became somewhat grim to look upon, unless he chanced to smile; and yet he seemed to Men worthy of honour, as a king that is in exile, when he did not hide his true shape. . . Thus he became at last the most hardy of living Men, skilled in their crafts and lore, and was yet more than they, for he was elven-wise, and there was a light in his eyes that when they were kindled few could endure. His face was sad and stern because of the doom that was laid on him, and yet hope dwelt ever in the depths of his heart, from which mirth would arise at times like a spring from the rock.”

They sound a little intimidating, don’t they? But I thought, what the heck, I wonder what would happen if I made them into a sort of fill in the blanks template. And, VOILA! Here it is:

Now I need to get to work filling in the blanks and seeing what I come up with. When I get it finished, I’ll post it. If you make a similar one, I’d love to see it!

By the way: This post was migrated from my blogger blog (shirleytwofeathers.blogspot.com) and was first published on 1/20/10. I never did fill the form out… maybe I should do that sometime soon!

Posted in Lord Of The Rings, Who I Want To Be | Tagged Aragorn, interesting stuff