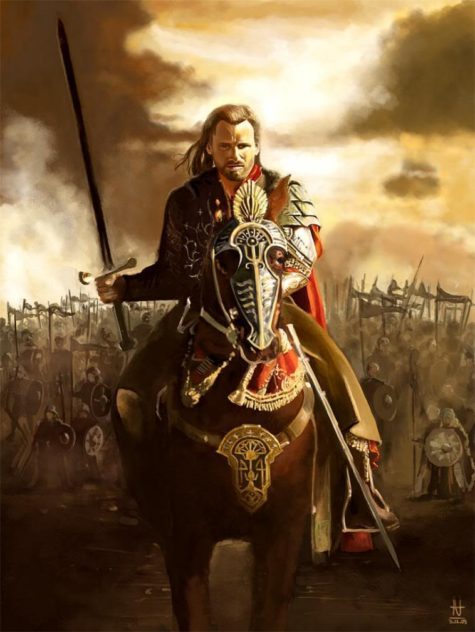 But… no… It’s just me, Shirley. Trying once again to be more than I am. Ok, that’s not exactly true. It occurred to me yesterday that the reason I have this deep seated desire to BE Aragorn is because I am Aragorn in my heart, and to see a vision of the inner me unfolding in a successful way… well… it draws me.. And it’s frustrating as hell because my vision of my inner self and my vision of my outer self are so irreconcilably different. And the failure of my life is so unbearably present.

It’s as if what Eowyn feared the most has already come true for me:

Aragorn: What do you fear, my lady?
Eowyn: A cage. To stay behind bars until use and old age accept them and all chance of valor has gone beyond recall or desire.

Maybe instead of consistently picking Aragorn – I should set out to be Bilbo. Old and done. I could do that one quite easily, I think. Not happily. But easily. And I don’t because the Aragorn inside me will not allow it. I guess I’m a fight to the death kind of person with no great battle to fight in… or something… so I end up just flailing around, flapping my gums, treading water, and posting shit on facebook.

I was looking for clips of the movie and found this one called “It’s My Life.” Wow. Yes! That’s what I want. Action, adventure, courage, meaning! I want to be a hero.

Remember that awesome speech at the Black Gate? Yeah! I want that kind of a life. I want to live/give my life that way. And it just seems impossible. What is the quest? Where is the fellowship? Who has the ring? Is there a Mordor? And did Sauron already win the war? Where is my lost love? Who is my family? What is my destiny? Where the heck is Sam??? Right now when I need him? And is the desire to be Aragorn the Ring I have to take to Mordor?

And who have I been this last year instead? Well, I think I’ve been a pretty credible Ent. A lot of bla bla bla… and I think I’ll leave that for another post. So… the day travels on, snow falls, the sun fades… and it’s time now to engage in the stuff of my real life such as washing dishes, starting up a frozen car so it won’t forget how, and I don’t know… bla bla bla…

By the way: This post was migrated from my blogger blog (shirleytwofeathers.blogspot.com) and was first published on 1/03/10.

Posted in Lord Of The Rings, Who I Want To Be | Tagged Aragorn