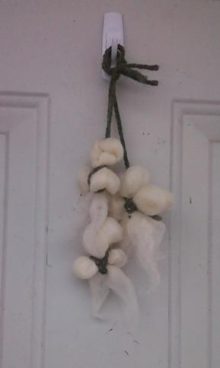 The Compitalia, a festival thought to be older than Rome itself, was held in mid January (January 12th) to honor the guardian spirits of local communities or neighborhoods. Sacrifices and offerings of honey cakes were made to the Lares Compitales at any place where two roads met.

In the countryside the ritual started at nightfall. Each family placed the statue of the underworld goddess Mania at the door of their house.They also made and hung woolen dolls representing men and women, along with strands of garlic and poppies. Slaves offered balls of wool with differing colors, to distinguish gender, rather than human figures. These were accompanied with humble requests that the Lares and Mania would be contented with the figures, thus ensuring the safety of the lives of the people inside the home.

In later years, strands of garlic and poppies were added to the offerings both on the doorways and at the crossroads.

Collected from Wikipedia and various other sources

Promote Your Page Too
Bread Crumbs
A trail of bread crumbs in case you lose your way wandering through this site ... Pagan Calendar > Blog Page > January > The Compitalia