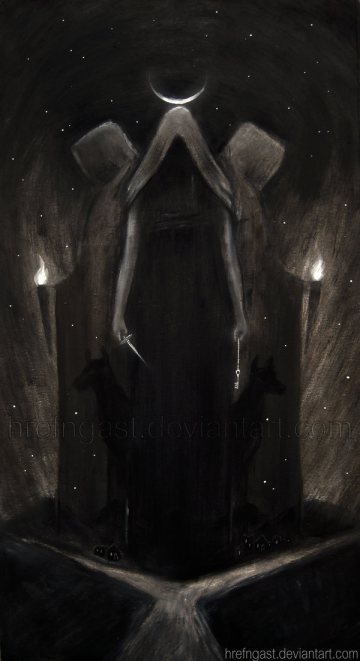 The last day of each of the lunar months is the sacred day of the triple goddess of crossroads and the patroness of Witches, Hekate.

Hekate had many names and titles: Hecate Trevia, “of the three ways”; Hecate Phosphoros, “the light bringer”; Hecate Nykterian “of the night”; and Hecate Basileia, “Hecate Queen.” On this night of the waning Moon we have a perfect opportunity to work with this goddess and ask for her blessing to illuminate our darkest times, and grant us her protection.

Hecate, goddess of the crossroads, hear my cry,
Protect and guard me under your midnight sky.
Hecate Phosphoros “she who brings the light,”
Hecate Trevia bless me with your wisdom tonight.

Hekate’s ancient devotees held dinners in her honor, known as Hekate Suppers. Once upon a time, these dinners were consumed outside under the dark moon, ideally at a crossroads. One plate was reserved for Hekate; after her devotees dined, just before they departed, Hekate’s plate was laid down at the crossroads.

Foods associated with her were prepared. The entree was usually fish, especially red mullet. Devotees feasted and celebrated. Offerings and leftovers were placed outside the door or at a crossroads for Hekate and her hounds.

Even way back when, cynics scoffed that food placed outside was actually consumed by feral dogs and homeless people without realizing that this is Hekate’s intent: this is one way she accepts offerings. (The Church was still trying to eradicate this ritual as late as the eleventh century.)

Traditionally whatever is given to Hekate cannot be reclaimed. Thus, do not break out your priceless set of china; lay the meal on the ground or use a serving dish that will be incorporated into the offering. Once the offering is laid down, depart without looking back. Hekate determines who picks up the offering.

Smaller, private offerings may be left at a crossroads, too:

Offerings can include the following:

Encountering or hearing a dog is an indication that your petition has been heard.

Other nights sacred to Hekate: