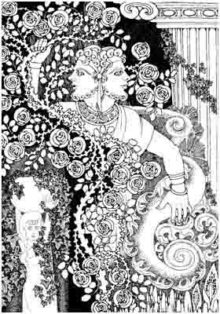 In ancient Rome, January 9th (according to some sources it was Jan 11) was the Agonalia or Festival to Janus, god of gates and doorways. There seem to be many different legends about the history of Janus. One has him the son of Uranus and Hecate. Another says he had a son named Tiberinus whose accidental drowning named Roma’s river. According to another he was a son of Apollo and the first king of Latium. His colony near the Tiber is supposed to have given the name to the Janiculum Hill. Another story says that Janus welcomed Saturn to earth after the latter was driven out of Olympia by Zeus.

Not much is known about how this festival was celebrated. During this festival, according to some sources, the Romans gave dates, figs, and honey sealed in white jars to the god Janus. Such gifts, and also money, would be given to family members as well. My source for the  information on gifts of dates, figs, and honey from Etsy, and I cannot vouch for it’s validity. I do, however; like the idea of sweet gifts to the God Janus and also  family members during this (his) month, and at this beginning time of the year.

From Ovid we have this:

Janus must be propitiated on the Agonal day.
The day may take its name from the girded priest
At whose blow the God’s sacrifice is felled:
Always, before he stains the naked blade with hot blood,
He asks if he should, Agatne? and won’t unless commanded.
Some believe that the day is called Agonal because
The sheep do not come to the altar but are driven (agantur).
Others think the ancients called this festival Agnalia,
‘Of the lambs’, dropping a letter from its usual place.
Or because the victim fears the knife mirrored in the water,
The day might be so called from the creature’s agony?
It may also be that the day has a Greek name
From the games (agones) that were held in former times.
And in ancient speech agonia meant a sheep,
And this last reason in my judgement is the truth.
Though the meaning is uncertain, Rex Sacrorum,
Must appease the Gods with the mate of a woolly ewe.”

Janus was very important in Rome because the weakest point in any building or municipality is its doorway. Anything from human enemies to evil spirits could enter via that route. So strong was this feeling that Romans always carried corpses out of buildings feet first so that the departed spirits would be less likely to find their way back in.

In 260 BC the Romans built an important gateway temple to Janus after a victory against the previously unbeatable Carthaginian fleet. This was left open in times of war and closed when the armies had returned to the city.

This seems puzzling since one would think that during war the gate would be closed for protection and left open for peacetime. But the meaning of this can be seen in that the gateway was not used on a regular basis, but only for generals marching out to war and when returning in a triumphal procession. During the time the gateway was open, Janus was out fighting for Rome while when it was closed it meant that the god would not abandon Rome.

Januarius was not always the first month of the year. Earlier it had begun, perhaps more sensibly, in March (Martius) with the onset of Spring. Januarius and Februarius were added by Numa Pompilius, one of Rome’s kings in the pre-Republic days. He also moved the beginning of the year to Januarius and set the number of days equal to 29 because Romans considered odd numbers lucky. Notice that all of the festivals are held on odd-numbered days. Centuries later Julius Caesar set the length to 31, as well as adding days elsewhere to fix the problem of the months no longer corresponding to the seasons, a result of the fact that the Roman year was shorter than the actual solar year.

If the first month is seen as the gateway to a new year, naming it after Janus (the -ary means “pertaining to”) actually makes sense. His most common depiction is of a head with two faces, one looking back, the other forward.

This was a festival originally for the protection of the king. A ram was the usual sacrifice victim. Probably originally held on the Quirinal Hill.