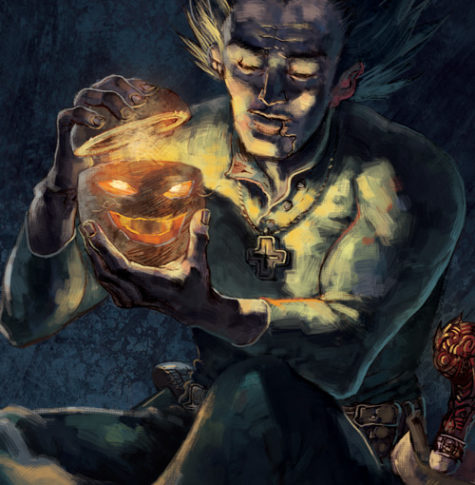 The Jack-o’-lantern is carried by a drunkard named Jack. Jack sold his soul to the devil, so that the devil would pay his pub tab. When the devil returned from the pub to collect Jack’s soul, the man tricked him into climbing a tree, then drew a cross under the tree, trapping the furious devil in its branches. Later, when Jack died and was rejected at heaven’s gates, he had to beg the devil for a place in hell. The devil was delighted at his chance to get revenge. He cursed Jack to wander the earth, with only a small frame for light. Jack put this flame in a carved turnip and used it as a lantern.

The Ignisfatus, or exhalation termed “Will-with-a-Whisp,” or “Jack-with-a-Lanthorn,” which is sometimes seen in churchyards, or marshy and fenny places in summer and autumn, was considered by many old inhabitants in this neighborhood, when the author was in his infancy, to be a kind of device of the evil spirit to draw human beings from the road they were pursuing into some frightful abyss of misery; and there leave them without any hope of regaining the enjoyment of happiness in the land of the living. 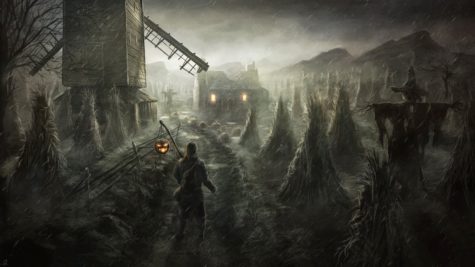 Stories of the origins of the jack o’ lantern are many and varied. Here are some of the ones I found:

A popular legend giving the origin of the jack-o’-lantern in Wales deals with the idea of a stupid devil. A long time ago there lived on the hills of Arfon an old man of the name of Sion Dafydd, who used to converse much with one of the children of the bottomless pit.

One morning Sion was on his way to Llanfair-Fechan, carrying a flail on his shoulder, for he had corn there, when whom should he meet but his old friend from the pit, with a bag on his back, and in it two little devils like himself. After conversing for some time they began to quarrel, and presently were in the midst of a terrible fight. Sion fell to basting the devils with his flail, until the bag containing the two little ones went all to pieces, and the two tumbling out, fled for their lives to Rhiwgyfylchi, which village is considered to this day a very wicked place from this fact.

Sion then went his way rejoicing, and did not for a long time encounter his adversary. Eventually, however, they met, and this time Sion had his gun on his shoulder.

Then the devil asked, “Shall I have a whiff out of it?”

“You shall,” was Sion’s reply, and he placed the mouth of his gun in the devil’s throat and drew the trigger. Well; that was the loudest report from a gun that was ever heard on this earth.

After a lapse of time, Sion met him again in the guise of a gentleman, but the Welshman knew it was the tempter. This time he made a bargain for which he was ever afterwards sorry, i.e., he sold himself to the devil for a sum down, but with the understanding that whenever he could cling to something the devil should not then control him.

One day when Sion was busily gardening, the evil one snatched him away into the air without warning, and Sion was about giving up all hopes of again returning to earth, when he thought to himself, “I’ll ask the devil one last favor.”

“All I want is an apple,” said Sion, “to moisten my lips a bit down below; let me go to the top of my apple tree, and I’ll pick one.”

“Is that all?” quoth the devil, and consented.

Of course Sion laid hold of the apple tree, and hung on. The devil had to leave him there. But the old reprobate was too wicked for heaven, and the devil having failed to take him to the other place, he was turned into a fairy, and is now the jack-o’- lantern.

This is one of the apparitions of the night, and one of the most mischievous and tricky of the ghostly family. What form or color he has we know not, as no one has ever clearly seen him; his lantern has been seen, and he has been heard splitting his sides with laughter at his own tricks, and the perplexity of those whom he might have led astray; and people say that his laugh was not unlike the loud sudden neighing of a horse.

His light was seen on dark nights like a lighted lantern on the sheep-paths on the hillsides. If he happened to be far off, no one was deceived, as his ungainly movements betrayed him as “Lantern Jack in search of his sheep,” and as the saying goes:

An ignis fatuus
Deceives not many of us.

The time when he generally succeeded with his mischief was when he found someone all alone travelling a path on open fields. He would begin by appearing as a small speck of fire, of a clear blue flame, which he moved before the wayfarer along the middle of the path until his attention had been secured; then the flame would gradually grow until its brightness would completely blind him, after which the traveler was entirely at Jack’s mercy, and he would lead him where he pleased.

Stories are related of men who have been led miles out of their way in this manner, especially young men going to see their sweethearts on dark winter nights.

Jack o’ lanterns are the spirits of unrighteous men, which by a false glimmer seek to mislead the traveler, and to decoy him into bogs and moors. The best safeguard against them, when they appear, is to turn one’s cap inside out.

When any one sees a Jack o’ lantern, let him take care not to point at him, for he will come if pointed at. It is also said that if any one calls him, he will come and light him who called; but then let him be very cautious.

Near Skovby on the isle of Falster there are many Jack o’ lanterns. The peasants say they are the souls of land-measurers who in their lifetime had perpetrated injustice in their measurements, and therefore run up Skovby bakke at midnight, which they measure with red hot iron rods, crying, “Here is the clear and right boundary! from here to there!”

There is, however, another story as to the origin of the jack o’ lantern. The haunting spirit is that of a blacksmith, who could get no admittance even into hell. He was very cold, and begged for a single ember to warm himself, and at last one was given him, and he has gone shivering about with it ever since.

Jack o’ Lanterns are, as tradition tells us, the souls of unbaptized children. Because these souls cannot enter heaven, they take their abode in forests, and in dark and desert places, where they mourn over their hard lot. If at night they get sight of any person, they run up to him, and then hasten on before him, to show him the way to some water, that he may baptize them therewith. And that no one should neglect to do, because the poor beings must remain without the gates of paradise until some one takes pity on them.