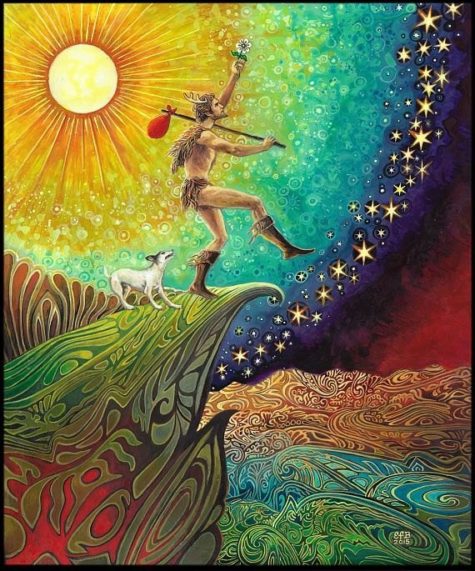 The Fool is the spirit in search of experience. He represents the mystical cleverness bereft of reason within us, the childlike ability to tune into the inner workings of the world. The sun shining behind him represents the divine nature of the Fool’s wisdom and exuberance, holy madness or ‘crazy wisdom’. On his back are all the possessions he might need. In his hand there is a flower, showing his appreciation of beauty. He is frequently accompanied by a dog, sometimes seen as his animal desires, sometimes as the call of the “real world”, nipping at his heels and distracting him. He is seemingly unconcerned that he is standing on a precipice, apparently about to step off.

Here are some key phrases that can be used to describe this card: 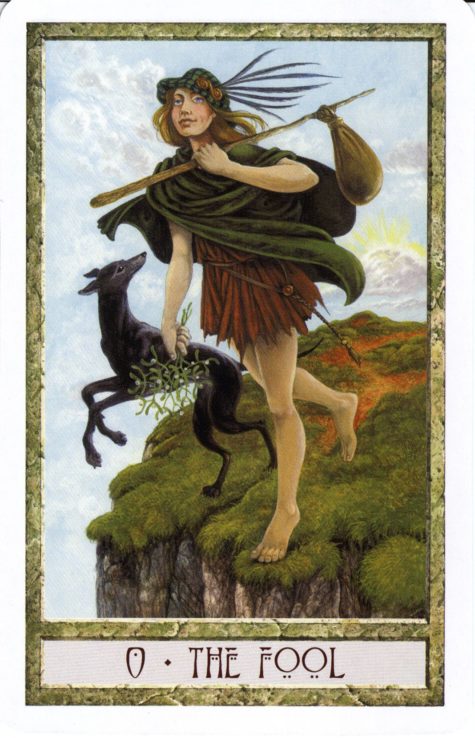 One of the keys to the card is the paradigm of the precipice, Zero and the sometimes represented oblivious Fool’s near-step into the oblivion (The Void) of the jaws of a crocodile, for example, are all mutually informing polysemy within evocations of the iconography of The Fool. The staff is the offset and complement to the void and this in many traditions represents wisdom and renunciation, e.g. ‘danda’ (Sanskrit) of a Sanyassin, ‘danda’ (Sanskrit) is also a punctuation mark with the function analogous to a ‘full-stop’ which is appropriately termed a period in American English. The Fool is both the beginning and the end, neither and otherwise, betwixt and between, liminal.

The number 0 is a perfect significator for the Fool, as it can become anything when he reaches his destination as in the sense of ‘joker’s wild’. Zero plus anything equals the same thing. Zero times anything equals zero. Zero is nothing, a lack of hard substance, and as such it may reflect a non-issue or lack of cohesiveness for the subject at hand.

In many esoteric systems of interpretation, the Fool is usually interpreted as the protagonist of a story, and the Major Arcana is the path the Fool takes through the great mysteries of life and the main human archetypes. This path is known traditionally in Tarot as the Fool´s Journey, and is frequently used to introduce the meaning of Major Arcana cards to beginners.

The conventional explanations say that The Fool signifies the flesh, the sensitive life, depicting folly at the most insensate stage. When The Fool appears in a spread, he is a signal to strip down to the irreducible core, and interrogate whether the Querant’s self-vision is obscured. It may also be a warning that significant change is coming. Another interpretation of the card is that of taking action where the circumstances are unknown, confronting one’s fears, taking risks, and so on.

From: Information collected from various sources.