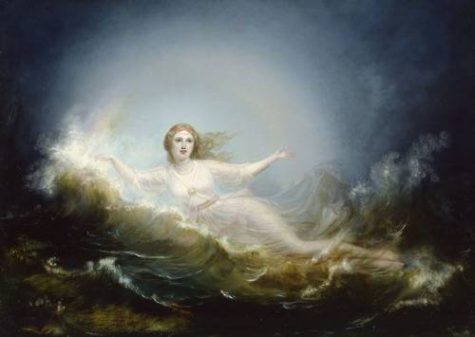 In the beginning, says the Kalevala, there was only Ilmatar, the void and a great deal of wind. She was alone in the beginning of time. She lived in the heavens, but eventually she grew restless and slipped into the vast cosmic sea. She floated and frolicked for centuries on this primordial ocean, counting rainbows and letting the wind play in her hair.

She began to long for a son.Her longing was so great that the East Wind itself took pity. She found herself buffeted and tossed by the wind’s tempestuous love-making until, exhausted, she could bear it no longer and collapsed. During this storm she became pregnant. And there, inside her, was conceived Vainamoinen, the child of the wind.

The goddess floated for centuries on this primordial ocean, unable to give birth because there was no land. She prayed constantly to the god Ukko, the highest of the gods, to help her. After seven centuries or so she began to give up hope, and Ukko took pity on her and sent a duck.

The poor bird was desperately looking for somewhere to land so she could make a nest and lay her eggs. When Ilmatar saw the bird’s predicament, she helpfully raised her knee and the bird came swooping down. Half a dozen cosmic eggs were laid, followed by an egg made of iron. The bird then gathered them all up, sat upon them and went to sleep.

Luonnotar sat and watched the bird eagerly, happy for something to finally be happening after centuries of loneliness and boredom. She became too excited, however, her leg began to heat up, she became extremely uncomfortable. Slowly, carefully, she began to stretch out her leg.. and slowly, inevitably, the seven eggs rolled off and fell majestically into the raging sea.

Now, cosmic eggs are delicate things, as soon as they fell into the waters, they broke open. Ilmatar watched in amazement as the broken shells of the eggs formed the heavens and the earth. The yolks became the sun, the whites the moon, and scattered fragments of the eggs transformed into the stars.

And thus the world was formed. As for the iron egg, the black yolk became a thundercloud.

Ilmatar was delighted with events, and busied herself shaping the lands and adding finishing touches. Even though dry land was now available, Ilmatar continued to carry the child within her for thirty summers while she finished her work. Eventually, she felt a stirring inside her. Vainamoinen had woken up after 30 years of being in the womb and was eager to see the new world. He had quite a struggle to get out, but he managed in the end and eventually, Ilmatar gave birth to Vainamoinen, a bouncing bonny old man, and the worlds first shaman, who then finished her creation.