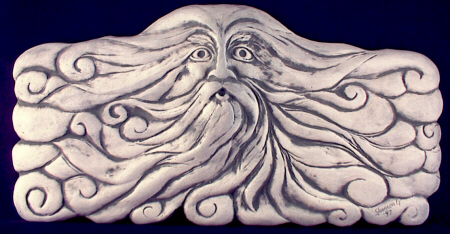 In ancient Greek religion and myth, the Anemoi (Greek: Ἄνεμοι, “Winds”) were wind gods who were each ascribed a cardinal direction from which their respective winds came, and were each associated with various seasons and weather conditions.

They were sometimes represented as mere gusts of wind, at other times were personified as winged men, and at still other times were depicted as horses kept in the stables of the storm god Aeolus, who provided Odysseus with the Anemoi in the Odyssey. The Spartans were reported to sacrifice a horse to the winds on Mount Taygetus. Astraeus, the astrological deity, and Eos/Aurora, the goddess of the dawn, were the parents of the Anemoi, according to the Greek poet Hesiod. The daughters of the Anemoi are the Aurae (wind nymphs).

According to Hesiod, the beneficial winds, Notus, Boreas, Argestes, and Zephyrus, were the sons of Astraeus and Eos, and the destructive ones, as Typhon, are said to be the sons of Typhoeus. Later, especially philosophical writers, endeavoured to define the winds more accurately, according to their places in the compass.

The Anemoi are divided into two groups: 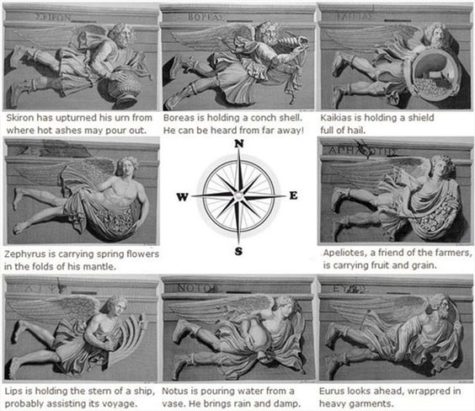 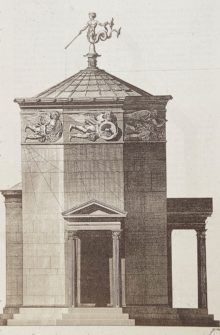 A moveable Triton in the centre of the cupola pointed with his staff to the wind blowing at the time.

All these eight figures have wings at their shoulders, all are clothed, and the peculiarities of the winds are indicated by their bodies and various attributes.

This is how it looks today: