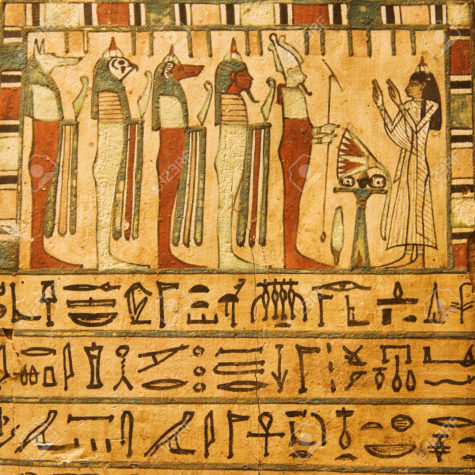 Egyptian deities did not require human sacrifice or annihilation of people with their religious beliefs. Temples were not considered a place of communal worship. They were looked upon as houses for the deities; there, statues were kept and attended by priests and priestesses. The priesthood was not celibate. The pharaoh was considered an incarnated god upon Earth.

The life of the average Egyptian was a blend of religion and the use of magick. Magick was a vital part of every day life. The people believed that worship was basically a private, personal concern and duty. After all, the ancient Egyptians said, when you stood in the Hall of Judgment after death, no one could tamper with the scales that weighed your heart for truth and goodness. Your soul was laid bare; everything was revealed.

Individual worship was performed at home altars and certain shrines, with the populace as a whole participating in in the great seasonal festivals. The common people were not admitted to the great temples, but they made pilgrimages to certain shrines.

Since worship was considered a private concern, the ordinary person visited the temple of his choice for healing or to present petitions when he needed something. Even then, he entered only the outer courts of the temples. The inner sanctuary of the deity was entered only by the highest priests, priestesses, or the pharaoh.

Originally, the priests and priestesses did not believe in polytheism or animal worship. They believed that the god-forms each represented a principle or aspect of the Supreme Creator. They believed that as long as the spiritual needs of humans were met, it did not matter how the Ultimate Spirit was pictured. These priests / priestesses used a sacred language known only to them for all rituals and worship, probably the remnant of a very ancient language. 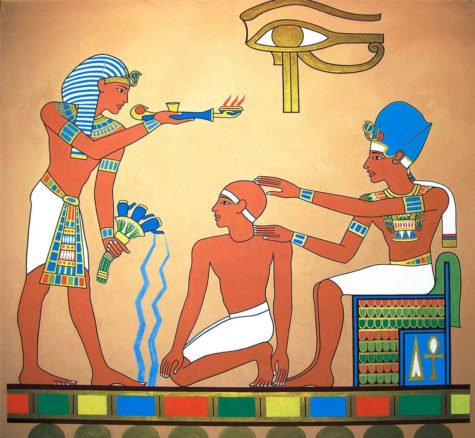 Some temples were centers of healing, “sleep houses,” where dream therapy and hypnosis were used to cure the sick. In these places, quiet music of special sounds and rhythms were employed for healing the whole person – body, emotions, mind, and spirit.

Egyptian worship was intertwined with music and dancing. The Singers could be either male or female, depending upon the deity they served. The Temple Dancers were most often female, spending their early years actively participating in the sacred dances, and their later years instructing the new Dancers.

Dancing and chanting made it necessary to have musicians. These were attached to the temples, as were the Dancers and Singers, and were usually female. Sometimes there were dramatic performances for very special religious rites.

The ancient Egyptians were well aware that humans had more than just a physical body. They said that humankind had seven souls. Much of the esoteric meaning of these forms has been lost. What we now know of these “souls” is limited.

Here is a simplified explanation of the seven souls:

The soul name, ren, was believed to be a vital part of every person. It as given to each person at birth by the goddess Renenet. The Egyptians believed that only by knowing the correct soul name of a person, animal, or object could you have power over it. 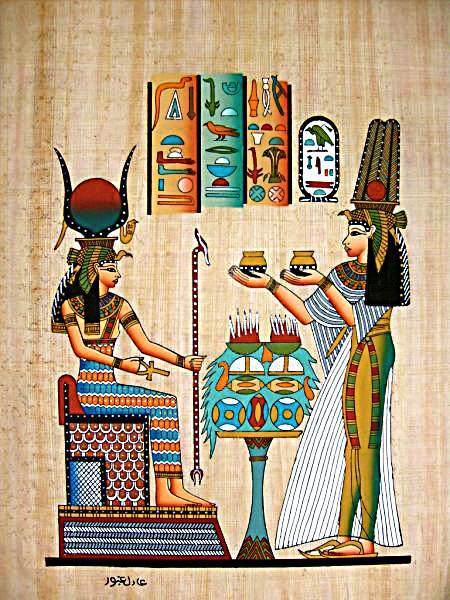 At the beginning of each ritual, four lighted lamps were set at the four quarters or directions. They represented the four sons of Horus. Symbols were also set at these quarters. At the east was placed a tat (pole or pillar) and in the south a model of a palm tree. At the west was set a figure of Anubis, in the north a figure of a mummy, sometimes lying in a coffin.

The power of any spell, incantation, or any word of power was considered greatly increased by the use of magickal pictures and amulets. The ankh was a favorite symbol, along with the tat of Osiris (also called a tet or djed), the solar disk, the scarab, the lotus, the buckle of Isis, and the Eye of Horus.

Wax images were used in certain rituals, primarily for gaining someone’s love or harassing enemies. The name of the individual was cut or written on the image. After spells were recited over the figure, it was stabbed, destroyed, of (for love) carried next to the heart. The priests of Amen-Ra at Thebes regularly burned a wax image of the evil god Apep. These wax serpent forms were subjected to all kinds of abuse before they were destroyed in a fire.

Gods of the Four Elements:

Gods of the Four Directions:

Source: Magick of the Gods and Goddesses