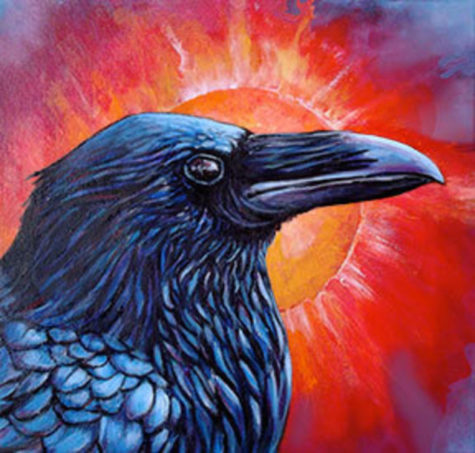 The winter solstice and winter season is the time of greatest power for those with the raven as a totem. The solstice is the shortest day of the year The sun shines the least on this day, thus it is the darkest. From that day forth, the light shines a little more each day This is symbolic of the influence of raven. It teaches how to go into the dark and bring forth the light. With each trip in, we develop the ability to bring more light out. This is creation.

The Raven’s keynote is that of magic, shapeshifting, and creation. While its cycle of power is that of winter solstice. The raven is one of those birds that has a tremendous amount of lore and mythology surrounding it, and it is often contradictory. It is a bird of birth and death, and it is a bird of mysticism and magic. 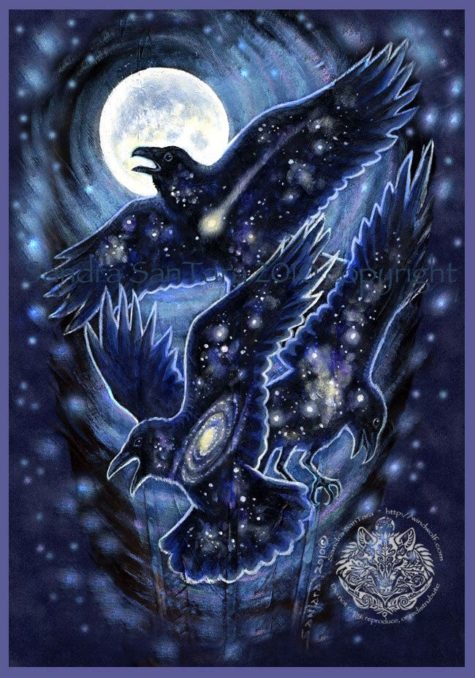 In the near East, the raven was considered unclean because it is a scavenger. It is one of the foods listed as forbidden in the Bible. The raven is one of the birds that Noah sent out after the floods, but it did not return to the ark. On the other hand, also in Biblical lore is the tale of how a raven fed the prophet Elijah when hiding from King Ahab.

In Scandinavian lore, the raven played a significant role. The Norse god Odin had a pair of ravens who were his messengers. Their names were Hugin (thought)and Munin (memory). Odin was known to shapeshift as a raven himself. This reflects the idea of raven being a messenger of the great spiritual realm.

In the Middle Ages the croak of the raven was believed to foretell a death or the outcome of a battle. It was even taught to the common folk in Christian communities that wicked priests became ravens when they died. Even today, some old timers tell how you can expect hot weather when a raven is seen facing a clouded sun.

The raven is a member of the corvids family, to which belong crows and magpies and other such birds. In truth, the only really significant difference between the crow and the raven is in size, the raven being much larger. It would be beneficial to study the information on the crow for anyone who has a raven as a totem. Much of the same information that applies to one, also applies to the other. It is simply a matter of degree. Rather than repeat that information here, I would like to give you some information not generally associated with the crow itself. 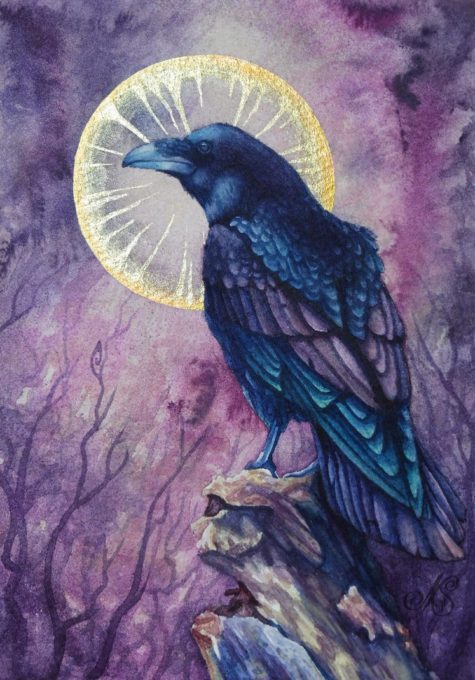 The raven has a wealth of myth and lore surrounding it. In many ways it is comparable to the coyote tales of the plains Indians, the Bushmen tales of the mantis and other societies in which an animal plays both a significant and yet confusing role. The coyote was both trickster and wise being-fool and wise one. This was true of the mantis in the tales of the Kalahari Bushmen.

In the Pacific Northwest the raven has this same aura about him. In the Pacific Northwest, raven brought forth life and order Raven stole the sunlight from one who would keep the world in darkness. Nothing could exist without raven. Raven is honored in art and on totem poles, reflecting the tales and mysticism that have developed around it.

With raven, human and animal spirits intermingle and become as one. This is reflected in its deep, rich shiny black. In blackness, everything mingles until drawn forth, out into the light. Because of this, raven can help you shapeshift your life or your being. Raven has the knowledge of how to become other animals and how to speak their languages.

Ravens are great at vocalizations, and they can be taught to speak. They incorporate and mimic the calls of other species. In the Northwest are tales of the Kwakiutl Indians who offered the afterbirth of male newborns to Raven so that when they grew up, they would understand their cries. Raven can teach you to understand the language of animals.

Ravens are playful, and they are excellent tool users. They will use stones and anything else that is available to help them crack nuts and such. They are birds not intimidated by others, and they are very fast and wary Because of this, they are not easy prey for other animals or birds. This implies the ability to teach you how to stir the magic of life without fear They are also known for their amorous behavior, reflecting the strong creative life force to which they have access.

This creative life force can be used to work the magic of spiritual laws upon the physical plane. It can be used to go into the void and stir the energies to manifest that which you most need. All this and more is what raven teaches. If raven has come into your life, expect magic. Somewhere in your life, magic is at play Raven activates the energy of magic, linking it with your will and intention. 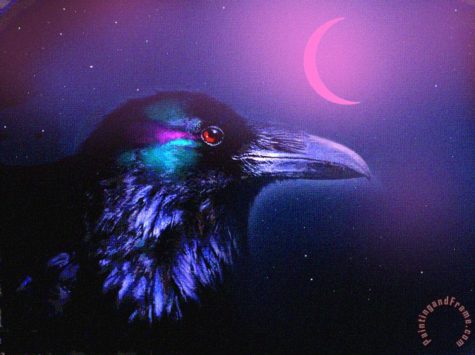 Raven speaks of the opportunity to become the magician and/or enchantress of your life. Each of us has a magician within, and it is Raven which can show us how to bring that part of us out of the dark into the light. Raven speaks of messages from the spirit realm that can shapeshift your life dramatically Raven teaches how to take that which is unformed and give it the form you desire.

Promote Your Page Too
Bread Crumbs
A trail of bread crumbs just in case you lose your way exploring your higher power. Site News > The Powers That Be > What’s New > Animal Guides and Totems > Raven Power