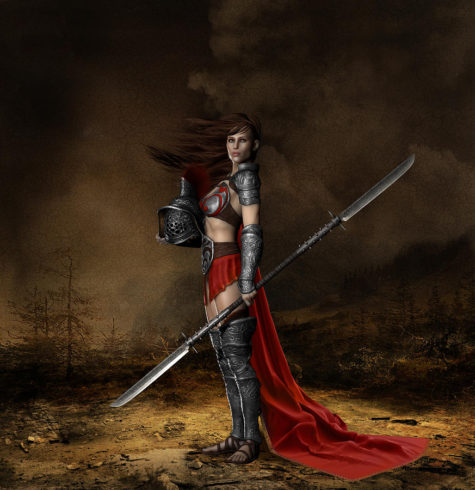 Bellona, Goddess of War and Conquest, was once extremely popular with Roman soldiers. Roman senate meetings pertaining to foreign wars were conducted in Bellona’s temple on the Capitoline Hill.

Bellona’s name derives from the same root as bellicose and belligerent. Some consider it safer to call her Bella Donna. Bella Donna, literally “Beautiful Lady,” contains the name Bellona within it. It may be a euphemistic pun so that one could refer to Bellona without actually calling upon this beautiful but fierce lady.

Classical Roman mythology classifies Bellona, Lady of War, as belonging to the family of Mars. She is variously described as the wife or sister of Mars, less often his daughter, and sometimes his charioteer or nurse.

This goddess did not play a significant role in either myth or legend, and her worship appears to have been promoted in Rome chiefly by the family of the Claudii, whose Sabine origin, together with their use of the name of Nero, has suggested an identification of Bellona with the Sabine war goddess Nerio.

Her temple at Rome, dedicated by Appius Claudius Caecus (296 B.C.) in fulfillment of a a vow during the Third Samnite War with the Samnites and Etruscans, stood in the Campus Martius, near the Flaminian Circus and Porta Carmentalis (the Carmenta gate), and outside the gates of the city. It was there that the senate met to discuss a general’s claim to a triumph, and to receive ambassadors from foreign states. In front of it was the columna bellica, where the fetialis ceremony of declaring war was performed, in which a spear was cast against the distant enemy.

This native Italian goddess should not be mistaken for the Asiatic Bellona, whose worship was introduced into Rome apparently by Sulla, to whom she had appeared, urging him to march to Rome and bathe in the blood of his enemies. Her feast day was changed to the 24th of March, after the confusion of the Roman Bellona with her Asiatic namesake. See Day of Blood

Promote Your Page Too
Bread Crumbs
A trail of bread crumbs just in case you lose your way exploring your higher power. Site News > The Powers That Be > What’s New > Roman Gods and Goddesses > Bellona – Goddess of War