Hel – Goddess of the Underworld 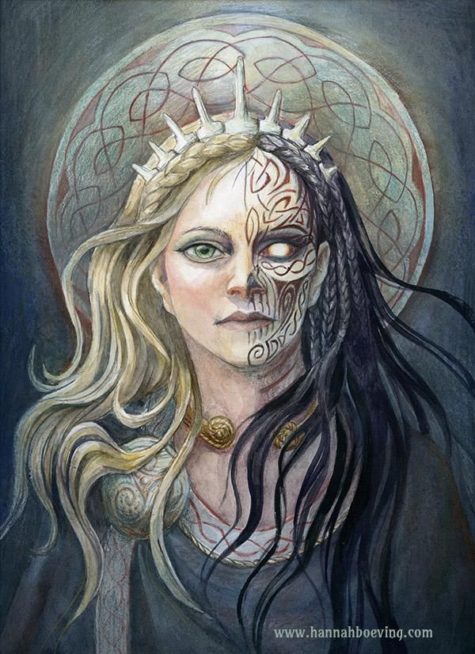 Hel is simultaneously half-dead and half-alive. Half of her body (cut vertically) is that of a fair, beautiful woman; the other half is necrotized flesh. She is half living woman, half corpse.

Rake and broom; the Black Plague was especially devastating in Scandinavia. Allegedly Hel roamed the land armed with her rake and broom. Villages totally wiped out by the Plague were said to have been swept away; where there were survivors, Hel had raked instead.

Once upon a time, being sent to Hel may have been inevitable, but it wasn’t perceived as punishment: Hel, daughter of Angerboda and Loki, rules the Norse realm of the dead. She is the keeper of the souls of the departed. Those who die at sea or in battle have other destinations; everyone else goes to Hel, who welcomes them into her home, Helhaim, regardless of whether they were good, bad, sinful, or saintly while alive.

Hel’s realm is not a sulphurous, fiery torture chamber. Rather it is a kind of inn or way station for the dead, although once checked in, one can never check out. Helhaim is a bleak gray, damp, misty realm; the concept of heat as punishment was imported from hotter, southern climes alongside Christianity. Lack of warmth with no hope of Spring was the Norse equivalent of desolation. That said, some regions of Helhaim are more comfortable than others; Hel judges and decides exactly where each individual soul is directed.

Hel’s name may derive from the Old German halja, meaning “covering.” She may or may not be the same spirit as Hulda (Holle). Hel and her brothers, a wolf and a snake, were raised by their mother, the witch Angerboda, in the Iron Wood. Prophecy suggested that the siblings would someday lead a Host of Destruction against the Aesir, and so Odin had them “brought” to Asgard, where each was ultimately entrapped. Odin personally seized Hel and flung her as far as he could; she landed in the Realm of Death and became its Queen. She lives in a great hall, Eliundnir, within Helhaim. She remains destined to lead an uprising of rebellious spirits and ghosts.

Hel manifests in dreams, most famously to Balder, Odin’s son. She appeared to him three days before his death, advising him (accurately) that in three days she would clasp him in her arms. Because her father was instrumental in killing Balder, it’s unclear how much inside information Hel possessed.

Mount Hekla, an active volcano in southern Iceland, was allegedly among the entrances to Hel’s realm. A nearby town is named Hella. Some have suggested that the mountain shares its name with the goddess, although others protest that Hekla means “slab” or covering,” which would still make it cognate with Hel as that is what her name means, too. It’s also theorized that the Belgian city of Hal may be named in her honor.

The Anglo-Saxon and Norse Goddess of the Underworld is honored annually on the Day of Hel (July 10th) with prayers, the lighting of black candles, and offerings of rose petals.

Found in: Encyclopedia of Spirits

2 Responses to Hel – Goddess of the Underworld