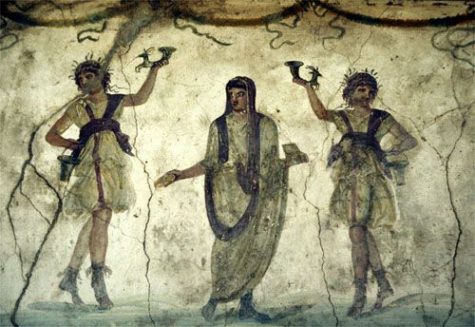 Lares are guardian spirits. Lares is plural but that’s fitting because they virtually always manifest in pairs. The singular is Lar. They are found inside the home, on the property they protect and also at crossroads. They make their home with the family they protect, usually dwelling by the hearth or beside the chimney.

The Lares themselves are usually depicted as dancing youths, with a horn cup in one hand and a bowl in the other. As progenitors of the family, they were accompanied by symbolic phallic serpents.

The Lar Familiaris protected all household members, free or slave, and was associated with a particular place, thus did not accompany a family who moved. Tradition holds that a family’s Lar would generously help those who honored him by devotionals and sacrifices. But the Lar would turn his back to those who would not offer him thanks or neglected him. 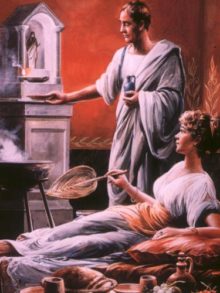 Presumed to be sons of Mercury and Lara, Lares are beneficent and friendly spirits, and deeply venerated by ancient Romans. In every house there was at least one little statue, and through these small statues, the Lare was presumed to take part in all that happened inside the house. Often a statue was put on the table during the meals, and other small statues were often placed in the higher places of the house, far from the floor, or even on the roof.

The Lares were worshiped in small sanctuaries or shrines, called Lararium, which could be found in every Roman house. They were placed in the atrium (the main room) or in the peristylium (a small open court) of the house. Here people sacrificed food to the Lares on holidays.

Care and attendance to domestic Lares could include offerings of spelt wheat and grain-garlands, honey cakes and honeycombs, grapes and first fruits, wine and incense. They could be served at any time and not always by intention: as well as the formal offerings that seem to have been their due, any food that fell to the floor during house banquets was theirs. On important occasions, wealthier households may have offered their own Lares a pig.

A household’s lararium, a shrine to the Lares Familiaris, usually stood near the hearth or in a corner of the atrium. A lararium often had the appearance of a cupboard or a niche containing a small statue, a niche painted on a wall, or a small freestanding shrine. Sometimes the Genius of the head of the household, pictured as a bearded or crested snake, or as a man with the fold of his toga covering his head, is depicted with the Lar. 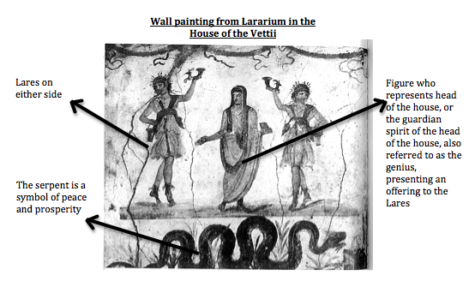 Iconography: Lares are usually depicted as two young men with a watch dog; if depicted in serpentine form, then they may be crowned.

The Lares Compitales, the guardian spirits who protected local neighborhoods were housed in the crossroad shrines which served as a focus for the religious, social and political life of their local, overwhelmingly plebeian communities. Shrines were erected at crossroads. These shrines were usually open in all directions so that the Lares could travel as needed.

More about the Lares Compitales and their festival and feast days can be found here:

Promote Your Page Too
Bread Crumbs
A trail of bread crumbs just in case you lose your way exploring your higher power. Site News > The Powers That Be > What’s New > Crossroad Spirits > Lares – The Night Watchmen