Neith – The First One 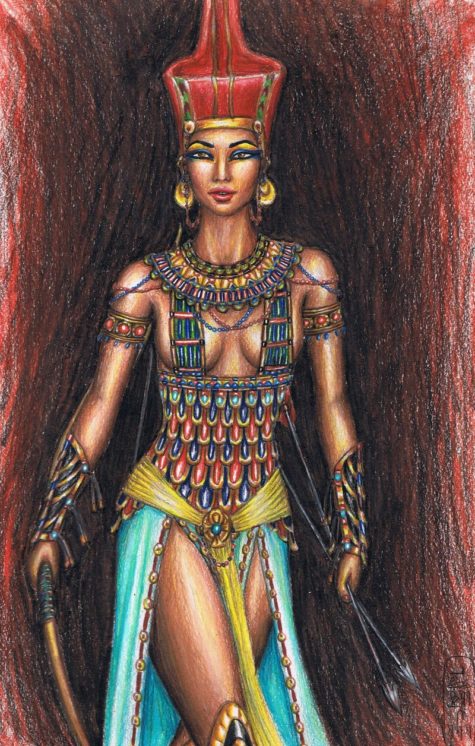 The inscription on Neith’s temple in Sais in the Nile Delta (now modern Sa el-Hagar) read:

I am all that has been,
that is and that will be
No mortal has yet been able
to lift the veil that covers me.

Neith, the First One, the primordial goddess, was never born but always existed. Alternatively she is completely self-generated. Neith traveled from the deserts and oases of Libya to emerge as among the greatest of Egyptian goddesses. In one Egyptian creation myth, Neith brought forth Ra, the sun. Then she invented the shuttle and loom, put the sky on her loom, and wove the world into existence. Neith, the first to give birth, invented weaving. Her name may derive from a word for “to weave” or “to knit.”

Mother of the Gods, goddess of war and the hunt, she is goddess of the lower heavens, a warrior goddess and protectress. Her name means “I have come from myself,” or self-begotten.

Eternal goddess, universal mother; the Spirit behind the Veil of Mysteries; World Body; Primal Abyss. Her cult was a very ancient one with two queens of the First Dynasty named after her. Often shown along side Selqet as mummy guardian and protectress of marriage. She wore the red crown of Lower Egypt. In her hands she held a bow and two arrows.

Neith is a goddess of hunting. She presides over crafts of all kinds, including witchcraft and warcraft. Amuletic weapons placed in the tomb to protect the deceased from evil spirits were consecrated to Neith. She is the judge of the Egyptian deities. After eighty years, when the lawsuit between Horus and Set in the Court of Deities was still not resolved, Neith was called in to render a decision to which all could defer. (She favored Horus but compensated Set. Neith has historically had a close positive relationship with Set.)

Her ceremonies were of a mystic nature. Neith was worshiped with Mysteries and lantern processions. In December (on or around December 8th), a great festival, called the Feast of Lamps, was held annually in her honor and, according to Herodotus, her devotees burned a multitude of lights in the open air all night during the celebration.

She is the patroness of domestic arts, weaving, hunting, medicine, war, and weapons. Turn to her when working with herbs, magick, healing, mystical knowledge, rituals, and meditation. She is the protectress of women and marriage.

She may be venerated independently or together with her son, Sobek. The Greeks identified her with Athena, also identified as originating in Libya. Many consider Athena to be a Greek path of Neith or at least a very closely related spirit.

Neith appears as an androgynous woman. She wears the red crown of Lower Egypt. She sometimes appears in the guise of a golden cobra, as well. In Iconography, she is customarily depicted with a green face and hands. Neith is portrayed suckling a crocodile at each breast.

The main imagery of Neith was as the deity of the unseen and limitless sky, as opposed to Nut and Hathor, who respectively represented the manifested night and day skies. Her epithet as the “Opener of the Sun’s Paths in all her stations” refers to how the sun is reborn (due to seasonal changes) at various points in the sky, under her control of all beyond the visible world, of which only a glimpse is revealed prior to dawn and after sunset. 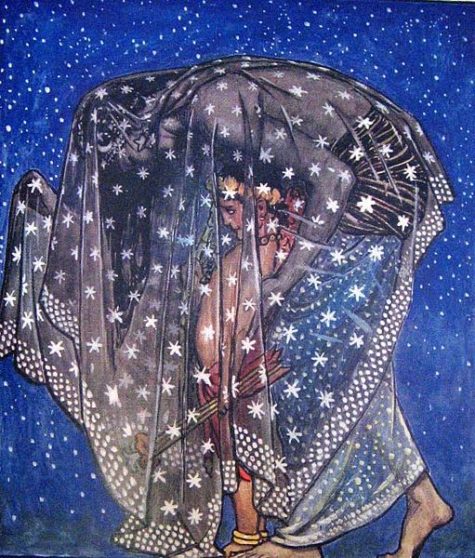 It is at these changing points that Neith reigns as a form of sky goddess, where the sun rises and sets daily, or at its ‘first appearance’ to the sky above and below. It is at these points, beyond the sky that is seen, that her true power as the deity who creates life is manifested.

This ancient goddess represents the full ecliptic circle around the sky (above and below). It was this realm, the cosmos below the horizon, that Neith personified, for she is the complete sky which surrounds the upper and lower sky, and which exists beyond the horizon, and thereby beyond the skies themselves. Neith, then, is that portion of the cosmos which is not seen, and in which the sun is reborn daily, below the horizon which may reflect the statement assigned to Neith as “I come at dawn and at sunset daily.”

As the goddess of creation and weaving, she was said to reweave the world on her loom daily. An interior wall of the temple at Esna records an account of creation in which Neith brings forth from the primeval waters of the Nun the first land. All that she conceived in her heart comes into being, including the thirty deities. Having no known husband she has been described as “Virgin Mother Goddess.”

Unique Goddess, mysterious and great who came to be in the beginning and caused everything to come to be . . . the divine mother of Ra, who shines on the horizon…

2 Responses to Neith – The First One

Promote Your Page Too
Bread Crumbs
A trail of bread crumbs just in case you lose your way exploring your higher power. Site News > The Powers That Be > What’s New > Egyptian Gods and Goddesses > Neith – The First One