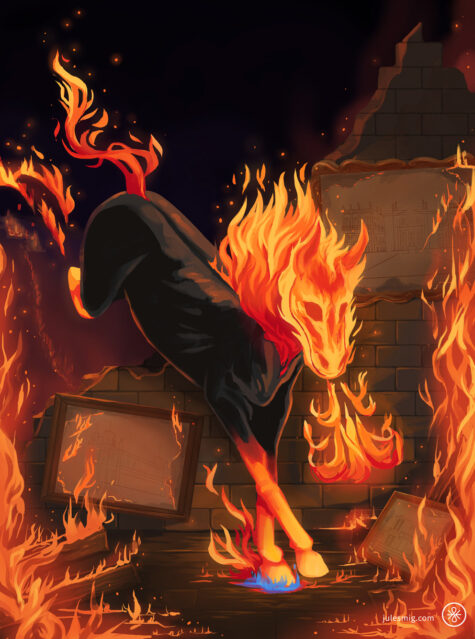 The Headless Mule or  Mula-Sem-Cabeça, is a mythical character in Brazilian folklore. The Mule’s appearance varies greatly from region to region. Its color is most commonly given as brown, sometimes as black. It has silver (or iron) horseshoes that produce a hideous trotting sound, louder than any horse is capable of producing.

The legend of the mula tells of a girl or woman who was cursed for having relations with a priest. As punishment for her part in a man of God’s sin, she is condemned to transform into a wild mule with fire in place of a head, shooting flames from its nonexistent nostrils and stampeding through villages at night. In the morning, she reverts to her human form, waking up naked and unable to remember a thing.

Transformation usually occurs at a crossroads. Depending on the source the headless mule may have a placeholder head and mane, made of the fire it spews, to which a red-hot iron bridle is tied.

Despite being headless, the Mule still neighs (usually very loud), and sometimes it moans like a crying woman. Is said to produce a piercing, terrifying noise during its rampage, and the clattering of its gold or silver shoes strikes fear into all who hear it. If you get too close, it might kick you into the afterlife.

To successfully hide from the mula, you must ensure specific body parts are concealed from its sight, as it seems to enjoy eating eyes, thumbs, teeth, etc., depending on which version of the legend you recall while in the process of dying of fright.

The transformation can be reversed temporarily by spilling the mule’s blood with the prick of a needle or by tying her to a cross. In the first case, transformation will be prevented while the benefactor is alive and lives in the same parish in which his feat was accomplished. In the second case the woman will remain in human form until the sun dawns, but will transform again the next time.

A more stable removal of the curse can be achieved by removing the bridle, in which case the woman will not shape shift again while the benefactor is alive. Tying the bridle back to the woman’s mouth will return the curse.

Removal of the curse is a great relief for the woman because the curse includes many trials, so the grateful woman will usually repent her sins and marry the benefactor. In any case, when the mule changes back to human form the accursed woman will be completely naked, sweated, and smelling of sulfur.

A person who encounters the mule should not cross its path, or the mule will follow the offender and trample him down. Instead, one should either be brave enough to remove the bridle or spill its blood, or else just lay face down on the ground, covering teeth and nails (as well as anything that shines) and the mule will hopefully fail to notice the stranger’s presence and trot away (because it has poor vision).

Some versions of the legend curse the priest instead of the woman, usually following a twist where the aforementioned relations are violently one-sided in the priest’s favor. Some also say the mula is a girl who lost her virginity outside of marriage. A third, more fantastic version involves a queen who had a bad habit of digging up kids’ graves and eating the corpses… until the king caught her in the act, whereupon she transformed into the mula and charged headlong into the night.