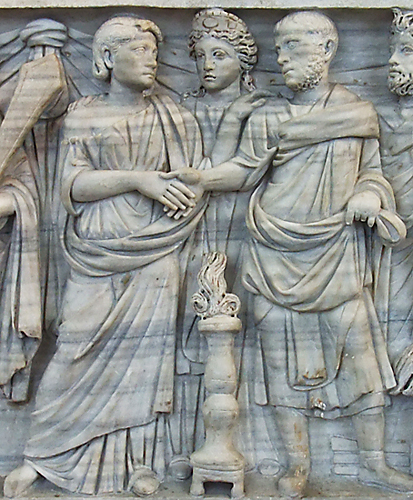 Iconography: Concordia is portrayed sitting or standing, wearing a long cloak and holding a sacrificial bowl or an olive branch in her left hand and a cornucopia in her right symbolizing the prosperity that comes with peace.. Sometimes she can be seen standing between two members of the Royal House who clasp hands.

Concordia is the Roman Goddess of agreement and harmony. The sister of peaceful Pax, she’s very conciliatory and will do almost anything to avoid upsetting people.

Concordia is one of the oldest of the Roman deities, having been worshipped since the earliest days of Rome. She was worshipped in many temples, but the oldest was on the Forum Romanum and dates back to 367 BCE and was built by Camilus. The temple also served as a meeting-place for the Roman senate. she had another temple nearby on the Capitoline Hill.

In ancient Roman religion, Concordia is the goddess who embodies agreement in marriage and society. Her Greek equivalent is usually regarded as Harmonia, with musical harmony a metaphor for an ideal of social concord or entente in the political discourse of the Republican era. She was thus often associated with Pax (“Peace”) in representing a stable society. As such, she is more closely related to the Greek concept of homonoia (likemindedness), which was also represented by a goddess.

Unlike many other Goddesses who were deified qualities, Concordia was worshiped from early times in Rome. She especially symbolized peace and agreement between the two classes of Rome, the plebeians or commoners, and the patricians or nobles.

Concordia had a place in the festival of the Caristia or Charistia (meaning “Pardoning”) of February 22nd, a holiday celebrated by families in which it was traditional to reconcile differences and to mend quarrels or feuds within the family. Concordia was invoked for Her powers of bringing harmony and agreement, and other Deities invoked at the Caristia were Janus, the double-faced God of New Beginnings, Salus, the Goddess of Health, and Pax, Goddess of Peace.

These four Divinities were honored with statues grouped together at the Altar of Peace (not the great big famous one built by Augustus, but a smaller one whose location is unknown). They were also said to be worshiped together on the 30th of March and the 30th of January, and Concordia was invoked by matrons on April 1st at the Veneralia, the festival of Venus Verticordia, along with Fortuna and Venus Herself.

In the later days of the Empire, Concordia was worshiped as the bringer of marital harmony within the imperial family, and as such was called Concordia Augusta.

She was depicted as a matronly woman, veiled and heavily draped, holding an olive branch, emblematic of peace, and a cornucopia, to symbolize the abundance that can be achieved when people work together in harmony. She sometimes wore a crown and held a sceptre, caduceus, or patera, a small offering bowl from which libations were poured.

She is associated with the stork, which symbolized family devotion to the Romans, and the dove, universally a symbol of peace and gentleness; and sometimes a star, as emblem of hope, is shown near Her. Another attribute of Concordia is the image of two clasped hands, both of which are right hands (like in a handshake), symbolizing two people agreeing. She is often shown on coins commemorating joint rule of leaders or the marriages of the imperial family.

Here is some history:

In the early days of Rome the two classes had joined to drive out the tyrannical Kings and created a Republic; but it quickly became a Republic of the patricians who had all the wealth and power. The plebeians were barred from the Senate and other governmental and priestly offices, though they of course made up most of the army. In 494 BCE the plebeians had had enough, and, refusing to serve in the army anymore, deserted and camped out on a hill near the Anio River that they called the Mons Sacer, or the Sacred Mountain. The patricians, left defenseless, came to some kind of sense and reforms were instituted giving the plebeians more rights.

To commemorate the compromises worked out between patricians and plebeians, a temple to Concordia was built in the northwestern end of the Roman Forum, backed up against the Capitoline Hill, near the Volcanal, a raised area that housed an altar to Vulcan. This temple was originally vowed in 367 BCE by the general Camillus and dedicated on July 22nd (which became Her festival) sometime afterwards. This temple was of somewhat unusual proportions due to the constraints of the site, but it was accorded one of the most beautiful in Rome, as it was finely made and entirely faced in marble. In later times it served as a museum of sorts, and many famous works of art were housed there. 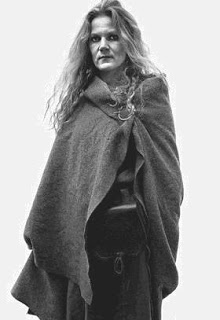