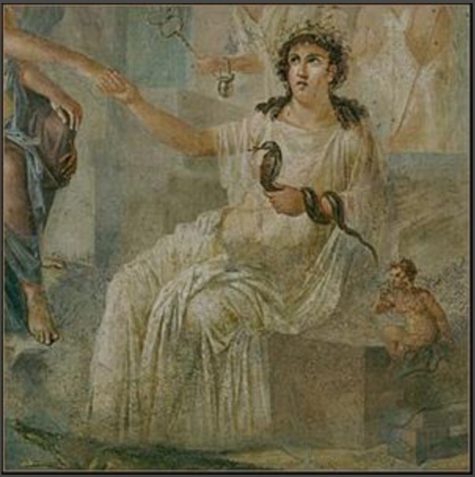 Bona Dea (“The Good Goddess”) was a divinity in ancient Roman religion. She was associated with chastity and fertility in women, healing, and the protection of the Roman state and people. According to Roman literary sources, she was brought from Magna Graecia at some time during the early or middle Republic, and was given her own state cult on the Aventine Hill.

Bona Dea was worshipped only by women. In fact, the presence of a man at rites in her honor were a sacrilige. May 1 was the annual, state-sponsored festival to Bona Dea at her temple. In early December, there was another private festival as well.

Her rites allowed women the use of strong wine and blood-sacrifice, things otherwise forbidden them by Roman tradition. Men were barred from her mysteries and the possession of her true name. Given that male authors had limited knowledge of her rites and attributes, ancient speculations about her identity abound, among them that she was an aspect of Terra, Ops, the Magna Mater, or Ceres, or a Latin form of Damia. Most often, she was identified as the wife, sister or daughter of the god Faunus, thus an equivalent or aspect of the nature-goddess Fauna, who could prophesy the fates of women.

The Good Goddess was a patron of the good of the earth and of chastity and fertility in women, she was invoked for healing and for freedom from slavery. Many of her worshippers were freed slaves and plebians, and many were women seeking aid in sickness or for fertility. She was also considered a protector from earthquakes.

Bona Dea was sometimes depicted with a scepter, vine leaves, wine, and a serpent, usually curled around her arm. Sometimes she was depicted seated, holding a cornucopia. Her image appeared on many coins.

The temple was decorated with vine-branches, and other plants and flowers (although myrtle was not permitted). Wine was served, but it was referred to as “milk” and the jar in which it was served, a “honey-pot.” A sow was sacrificed to her at the ritual.

Another ceremony was held in December in honor of the Bona Dea. The rites were conducted annually by the wife of the senior magistrate present in Rome in his home. She was assisted by the Vestal Virgins. The December rite was interesting because unlike the festival in May, it was not held in the goddess’ temple, not paid for by the state and the night of its celebration was not fixed. Unlike the May celebration, the December ceremony was an invitation only affair and pretty exclusive.

The celebrations for the Bona Dea seem to have been in the nature of a mystery cult. Men were strictly forbidden and the details that we have of the ceremony are from a late source, Macrobius. The worship seems to have been agricultural in origin and the careful exclusion of myrtle (associated with flagellation) may actually suggest origins as a purification ceremony.

In the year 62 BCE, the celebration was held in the home of Julius Caesar, then praetor and Pontifex Maximus, on December 3rd. His wife Pompeia and his mother, Aurelia, were in charge. A notorious Roman politician, Publius Clodius, dressed up as a woman and sneaked into the house. He was eventually caught by Caesar’s mother and kicked out. The ceremony had to be performed anew.

Promote Your Page Too
Bread Crumbs
A trail of bread crumbs just in case you lose your way exploring your higher power. Site News > The Powers That Be > What’s New > Roman Gods and Goddesses > Bona Dea