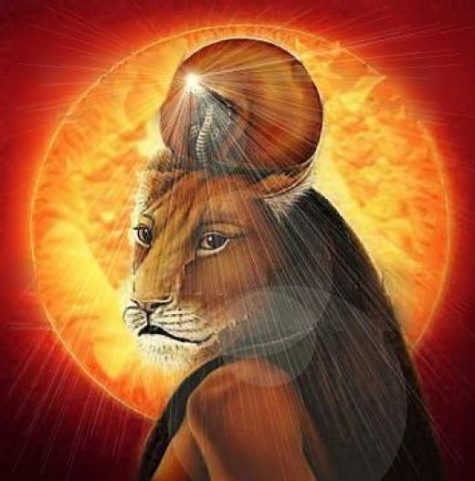 Sekmet, lioness goddess, epitomizes the blazing, scorching power of the sun. She is the goddess of war, justice, destruction, and healing. Her name may derive from a root word meaning “to be strong, powerful, mighty, or violent.” Sekhmet is among the fiery manifestations of the Eye of Ra.

She is a fierce guardian goddess of Upper Egypt. Her hot breath created the desert. Sekhmet was associated with plagues and pestilential diseases; illnesses that blew in on the desert winds. Sensational descriptions of Sekhmet tend to emphasize her destructive aspects, but she was also among Egypt’s most significant healing deities and remains an active healer today.

Sekhmet was represented by the searing heat of the mid-day sun (in this aspect she was sometimes called “Nesert“, the flame) and was a terrifying goddess. However, for her friends she could avert plague and cure disease. She was the patron of Physicians, and Healers and her priests became known as skilled doctors. As a result, the fearsome deity sometimes called the “lady of terror” was also known as “lady of life“. Sekhmet was mentioned a number of times in the spells of The Book of the Dead as both a creative and destructive force, but above all, she is the protector of Ma´at (balance or justice) named “The One Who Loves Ma´at and Who Detests Evil“.

Most spirits must be asked before they will openly intervene in someone’s life. (It’s possible that many  perform acts of rescue anonymously). Sekhmet appears when invoked. She is also renowned for appearing in dreams and visions in order to perform successful healings even when no one summoned her, at least not consciously. Instead, Sekhmet recognized a need and personally took the initiative.

If Sekhmet heals you without first being asked, offerings are in order. Sometimes this is a one time favor but it may also be her way of extending matronage. If you wish to accept her offer, then create an altar or make some other gesture of acknowledgement.

Sekhmet heals all illnesses except those of the eyes. She is associated with blood ailments. She has dominion over the menstrual cycle and women’s reproductive systems. Sekhmet should not be bothered for trifles, but she is an intensely powerful and proactive healer. She is the matron goddess of reiki.

Some theorize that Sekhmet is an emanation of the primordial goddess Hathor who first emerged in a time of crisis and took on a life of her own, similar to the relationship between Indian goddesses Kali and Durga. Just as Shiva is able to halt Kali’s dance of destruction, so Lord Thoth is able to pacify Sekhmet, something to keep in mind, just in case.

Sekhmet is depicted crowned with a solar disc encircled by a uraeus (upright cobra, symbolic of divine authority). Many Sekhmet statues survive perhaps because there were so many to begin with. Temple priestesses allegedly made offerings before a different statue each day of the year. Legend suggests that her statues were especially protected because of the aggressive nature of the deity and also because they were coated with anthrax or other highly infections bacterial powder to ensure that they were not disturbed.

Sekmet (Sakhmet) is one of the oldest known Egyptian deities. Her name is derived from the Egyptian word “Sekhem” (which means “power” or “might”) and is often translated as the “Powerful One”. She is depicted as a lion-headed woman, sometimes with the addition of a sun disc on her head. Her seated statues show her holding the ankh of life, but when she is shown striding or standing she usually holds a sceptre formed from papyrus.

Sekhmet´s main cult centre was in Memphis (Men Nefer) where she was worshipped as “the destroyer” alongside her consort Ptah (the creator) and Nefertum (the healer).

She was also known as the “Lady of Pestilence” and the “Red Lady” and it was thought that she could send plagues against those who angered her. When the centre of power shifted from Memphis to Thebes during the New Kingdom the Theban Triad (Amun, Mut, and Khonsu), Sekhmet´s attributes were absorbed into that of Mut (who sometimes took the form of a lion).

She was associated with the goddesses given the title “Eye of Ra”. According to myth, Ra became angry because mankind was not following his laws and preserving Ma’at (justice or balance). He decided to punish mankind by sending an aspect of his daughter, the “Eye of Ra”. He plucked Hathor from Ureas on his brow, and sent her to earth in the form of a lion. She became Sekhmet, the “Eye of Ra” and began her rampage. The fields ran with human blood. However, Ra was not a cruel deity, and the sight of the carnage caused him to repent. He ordered her to stop, but she was in a blood lust and would not listen. So Ra poured 7,000 jugs of beer and pomegranate juice (which stained the beer blood red) in her path. She gorged on the “blood” and became so drunk she slept for three days. When she awoke, her blood lust had dissipated, and humanity was saved.

In one version of the myth, Ptah is the first thing she sees on awaking and she instantly fell in love with him. Their union (creation and destruction) created Nefertum (healing) and so re-established Ma’at.

Sekhmet was closely associated with Kingship. She was often described as the mother of Maahes, the lion god who was a patron of the pharaoh and the pyramid texts suggest that the Pharaoh was conceived by Sekhmet. This ancient myth is echoed in the New Kingdom reliefs in the temple of Seti I which depict the Pharaoh being suckled by Hathor whose title is “mistress of the mansion of Sekhmet”. Ramesses II (Seti´s son) adopted her as a symbol of his power in battle. In friezes depicting the Battle of Kadesh, Sekhmet appears on his horse, her flames scorching the bodies of enemy soldiers. But, one Pharaoh in particular seems to have had an obsession with Sekhmet. Amenhotep III built hundreds of statues of Sekhmet in the precinct of Mut´s temple south of the Great Temple of Amun in Karnak. It is thought that there was one for every day of the year and that offerings were made every day.

Promote Your Page Too
Bread Crumbs
A trail of bread crumbs just in case you lose your way exploring your higher power. Site News > The Powers That Be > What’s New > Egyptian Gods and Goddesses > Sekmet