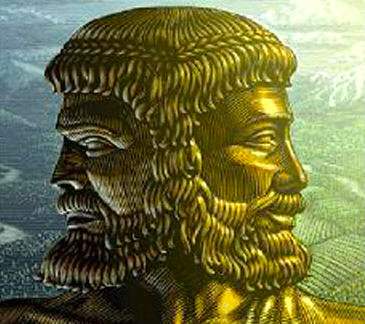 Janus is the two-faced spirit, but in the most positive sense of that term. Janus literally has two faces, indicating his power to see from all directions and perspectives. He sees the past and future simultaneously. Janus is a guardian and protector.

Janus is among the most ancient and significant deities of the Roman pantheon. He was in the Roman region long before the Romans arrived. Before the arrival of Jupiter, he may have been the preeminent male spirit. Officially superseded by Jupiter within the context of the Roman pantheon, Janus retained his right to be first.

Similar to modern traditions involving Eshu Elegbara, Janus is the first spirit invoked before any invocations, sacrifices, or offerings made to other Roman Deities. Jupiter then follows as “king,” followed by whomever else might be invoked.

The Roman Temple of Janus had double doors, known as the Gates of War. The temple was a visible symbol of peace or war. When there was peace throughout Rome, the doors of his temple were shut. This was a rare occurence.

In 153 BCE, the Romans changed their calendar, moving the New Year from the spring equinox to January 1st, one of the feast days of Janus, Spirit of Beginnings. With one face, Janus looks back on the old year; with the other he looks forward to the new. Roman New Year’s rituals incorporating the feast of Janus lasted for six days of joyous, raucous celebrating. Festivities included drinking, feasting, and decorating homes and buildings with holly, mistletoe, and lights.

Favored People: Diviners; he seems to like pretty women, too.
Iconography: Janus has two faces: one looking forward, the other back. Sometimes one face is young; the other old.
Consort: His original consort seems to have been Jana (Diana), but he was eventually paired with Juturna.
Sacred site: The Janiculum Hill in Western Rome, center of his veneration.

Promote Your Page Too
Bread Crumbs
A trail of bread crumbs just in case you lose your way exploring your higher power. Site News > The Powers That Be > What’s New > Roman Gods and Goddesses > Janus – Lord of Beginnings