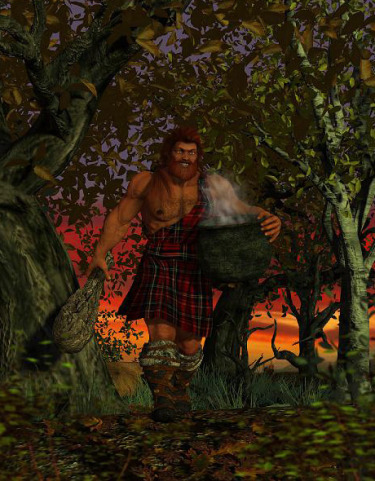 Dagda is the most prominent God of Celtic Mythology, leader of the Tuatha De Danann (Irish race of Gods of Mythology). He is identified with the Weish Gwydon and the Gallic Sucellos.

His titles and attributes:

Chief of the Tuatha Dé Daan, oldest of the Celtic deities, Dagda literally means “the good god.” What was his real name? That information may be reserved for initiates or he may be so old, no one knows any longer.

The Dagda is a spirit of magic and abundance. He is the tribal All Father, deity of the Druids, Lord of Regeneration, provider of plenty, Captain of Abundance. He is the Lord of New Grange. His children, Brigid and Angus Mac Og, are among the most powerful and beloved Irish deities. He plays the role of ideal father for his devotees.

The Dagda’s barrow (sidhe) features an inexhaustible supply of drink, three trees that always bear fruit, and a pig that is always alive, even though it’s slaughtered and consumed daily. He may be the prototype of the Grail King. The Romans identified him with Hercules.

The Dagda is the master of paradox. Incredibly wise and powerful, he’s uncouth and bumbling too. He’s an old, bald, fat, sloppy guy, but he’s a sex master too, a fertility spirit renowned for virility and sexual prowess. The Dagda engages in the Great Rite with great goddesses like the Morrigan and Boann.

A big, bald, bumbler with a beer belly; the Dagda wears a rustic tunic that no longer fits him. It’s too short for him, barely covering his buttocks and periodically exposing them. Don’t be fooled by his appearance. The Dagda only plays the fool; he’s brilliant, wise, and powerful. Furthermore, although it’s his posterior that’s mockingly discussed in myth, at least in the surviving ones recorded by Christian priests, tunics don’t only ride up in the back.

He was traditionally portrayed wearing a brown tunic that reached his hips, letting his huge penis drag while walking, a hooded cape that covered his shoulders and horse boots.

Dagda was commonly believed to be a crude and comical God. Some characteristics of The Good God, were his super strength, his insatiable need for women and food. He is a phallic deity, master of fertility and abundance. He was also a skilled artisan.

This God had various precious possessions:

The Dagda, a master harper, has a repertoire of magical songs:

He was the son of the Goddess Danus and the God Elada, father of the Goddess Brigid and God Aengus, his wife was Morrigan, with whom mates only on New Years Day.

A well known myth about him says that he went after the Goddess Boann (Elcmar’s wife). To be able to be with her, he stopped time, but still Buann got pregnant. Afraid of being caught, he kept the time still for nine months, until Aenghus (God of Love) was born, and this is why Aegnus is also know as “Forever Young”.

Dagda played an important part during the war against the Fomorians. Lugh sent Dagda to spy the Fomorians, and then distract them while Ireland was getting ready for war. On his way to the Fomorian camp, he saw a beautiful woman by the Unshim River in Corann, washing her feet. Her name was Morrigan.

Morrigan and Dagda had sex, and after they were done, Morrigan told him about the Fomorian’s plan of landing at Magh Scene, also she asked him to call the Irish Champions to join her and destroy Indech, King of the Fomorians.

With this knowledge, the God made it to the Fomorian’s camp and asked for an audience to come to a truce (while Lugh prepared the Irish Champions), but the Fomorians were no fools and knowing about his love for food, they came up with a plan to stop the truce.

The King of the Fomorians told the God he only would accept the truce if he could eat the biggest of the King’s cauldron full of porridge, in which was thrown cows, pigs and sheep. The Good God accepted and he pulled his gigantic spoon and ate the last drop of it, falling asleep afterwards.

When the God woke up, he made sure that there was a truce, and left. He made his way to the beach of Eaba dragging his gigantic cub, that left a very deep track, that was used as a boundary of a province, know in later days as the “Track of Dagda’s Cub”.

Another interesting myth says that while Aengus was away, the Good God divided among his children all of his lands, but didn’t saved anything for Aengus, who got really mad about it.

But Lugh helped Aengus to take revenge against Dagda, they tricked him to took him out of Bru Na Boinne (New Grannge, Dagda’s home), Aengus asked him if he could be able to live in Bru for La’a Ogus Oidhche, which means in Irish a day and a night, or day and night, also means for all the time. Aengus took possession of Bru this way.

The predecessor of the Good God was Nuada, but was injured in battle. The Good God reign over the Tuatha De Danann lasted around seventy or eighty years, but ended when he was injured during the Second Battle of Magh Tuiredh by Cethlenn.

Stories about Dagda can be found at Widdershins – The Dagda

Promote Your Page Too
Bread Crumbs
A trail of bread crumbs just in case you lose your way exploring your higher power. Site News > The Powers That Be > What’s New > Celtic Gods and Heroes > The Dagda