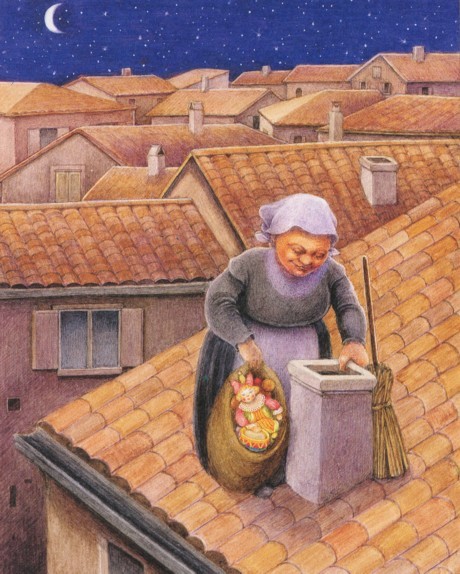 Befana is a benevolent Italian witch who brings gifts to children on Epiphany Eve (Jan 5). She fills children’s stockings with gifts just like Santa Claus does elsewhere.

Befana may pre-date Christianity and may originally be a goddess of ancestral spirits, forests, and the passage of time. Some identify this wandering nocturnal crone with Hekate.

Other legends describe her as an elderly woman in either ancient Judea or Italy who was too busy cleaning to heed the Magi when they invited her to join them in paying homage to the newborn Christ Child. Befana soon regretted her decision and has spent the past two thousand years trying to catch up with the Magi, leaving gifts for good children along the way.

Manifestation:
Befana manifests as an old lady who flies through the air on a broom or goat. She carries a heavy sack on her back filled with gifts or is a hunchback.

Time:
Befana is most active on the night of Jan 5th, the eave of the Feast of the Epiphany and the Day of the Magi. However, she may be contacted for assistance at other times as well. Befana is invoked in many Italian spells, especially those for good fortune.

Offerings:
Befana travels the world leaving gifts on Epiphany Eve (the night of January 5th). As an old lady can get tired from all that flying around; leave her some gifts to replenish her spirits: espresso, Strega liquore, cookies, Italian pastry.

From: The Encyclopedia of Spirits

Promote Your Page Too
Bread Crumbs
A trail of bread crumbs just in case you lose your way exploring your higher power. Site News > The Powers That Be > What’s New > Witches > Befana – The Christmas Witch