Bavaria is the ancient stronghold of Berchta, goddess of abundance. Allegedly whatever you give her will be returned many times over. Berchta rules a sort of transit area for souls, caring for and guarding those who died as babies. Depending on the version, they either stay in her garden forever or she tends them until they reincarnate and receive new life. She protects living children, too. German folk tales describe a beautiful lady dressed in white who mysteriously appears in the middle of the night to nurse babies.

Initially, Perchta was the upholder of cultural taboos, such as the prohibition against spinning on holidays. She was an immensely popular goddess, and so post-Christianity she was aggressively demonized by the Church as a Queen of Witches. People were told to baptize their babies because otherwise they’d end up in Berchta’s realm, not in Heaven. She is among the leaders of the Wild Hunt, usually leading a parade of unbaptized babies.

She evolved into a bogeywoman still invoked as a threat to make children behave before Yule. She allegedly punishes “bad children” but gives gifts to good ones.

This old story is as follows:

In the folklore of Bavaria and Austria, Perchta was said to roam the countryside at midwinter, and to enter homes during the twelve days between Christmas and Epiphany (especially on the Twelfth Night). She would know whether the children and young servants of the household had behaved well and worked hard all year. If they had, they might find a small silver coin next day, in a shoe or pail. If they had not, she would slit their bellies open, remove stomach and guts, and stuff the hole with straw and pebbles. 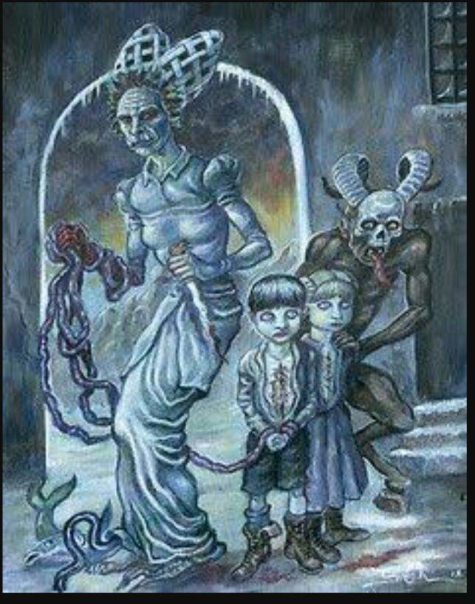 She was particularly concerned to see that girls had spun the whole of their allotted portion of flax or wool during the year.  She would also slit people’s bellies open and stuff them with straw if they ate something on the night of her feast day other than the traditional meal of fish and gruel.

The types of dead souls Berchta protects have a tendency to trouble the living by manifesting as destructive ghosts. Should you be afflicted by such a ghost, petition Berchta to soothe and remove it, escorting it to her realm, where it will be much happier.

A beautiful woman with pearls braided into her gold hair. A white veil obscures her face, and she wears a long, white silk dress. She has another look too: an old decrepit hag with long, wild grey hair and disheveled clothes. 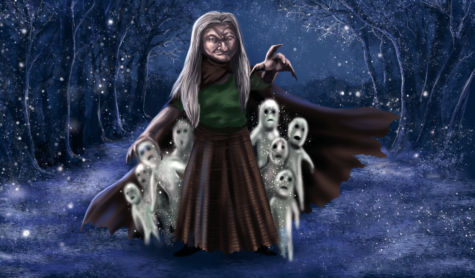 In many old descriptions, Bertha had one large foot, sometimes called a goose foot or swan foot. Grimm thought the strange foot symbolized her being a higher being who could shapeshift to animal form. He noticed that Bertha with a strange foot exists in many languages:

“It is apparently a swan maiden’s foot, which as a mark of her higher nature she cannot lay aside…and at the same time the spinning-woman’s splayfoot that worked the treadle”.

Because she sometimes manifests with one webbed goose foot, it is possible that Berchta may be the original Mother Goose. In the Tyrol she appears as little old woman with a very wrinkled face, bright lively eyes, and a long hooked nose; her hair is disheveled, her garments tattered and torn.

When she’s young and beautiful, she carries the keys to happiness in one hand and a spray of mayflowers in the other; as a hag, she carries a distaff.

A subterranean palace with a fabulous garden where she welcomes souls of children who died in infancy. 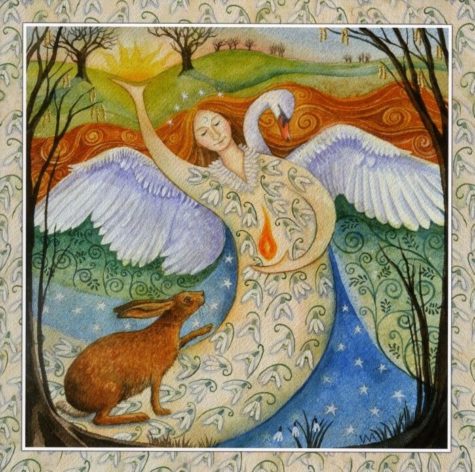 She maintains other homes within hollow mountains.

Perchta travels with a retinue of spirits called Perchten. Christian legend says the devil rides in their midst, but this may indicate the presence of a male deity who accompanies her.

Berchta is celebrated throughout the entire Yule season. Post-Christianity, Yule became synonymous with Christmas, but in its original Pagan context it was a lengthier season.

In German tradition, the Feast of the Epiphany (Jan 6) is Berchtentag – Berchta’s Day. The preceding eve is Berchtennacht. The festival is celebrated with processions characterized by grotesque masks.

Berchtesgaden in the Austrian Alps means “Berchta’s Garden.” Many springs near Salzburg are named in her honor.

Leave offerings out for her on Epiphany Eve, the way offerings are left for Santa. Not milk and cookies, though. Berchta likes a hearty meal: herring and dumplings is her favorite. Give her schnapps or other alcoholic beverages.

A Goddess of Many Names

Perchta had many different names depending on the era and region: Grimm listed the names Perahta and Berchte as the main names, followed by Berchta in Old High German, as well as Behrta and Frau Perchta. In Baden, Swabia, Switzerland and Slovenian regions, she was often called Frau Faste (the lady of the Ember days) or Pehta or ‘Kvaternica’, in Slovene. Elsewhere she was known as Posterli, Quatemberca and Fronfastenweiber. 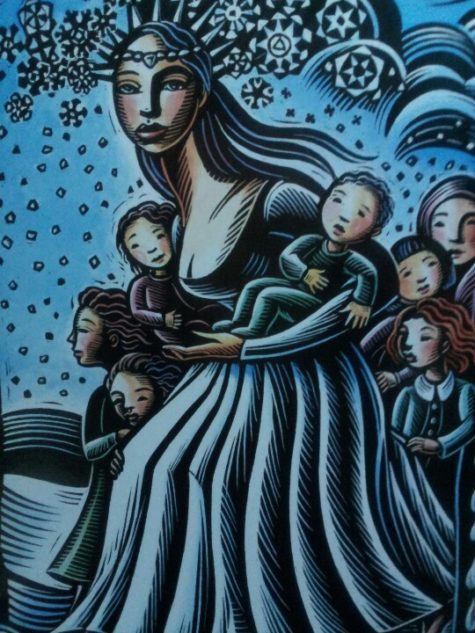 In southern Austria, in Carinthia among the Slovenes, a male form of Perchta was known as Quantembermann, in German, or Kvaternik, in Slovene (the man of the four Ember days). Grimm thought that her male counterpart or equivalent is Berchtold.

In contemporary culture, Perchta is portrayed as a “rewarder of the generous, and the punisher of the bad, particularly lying children”.

Vestiges of devotion to Berchta survive in some Alpine villages where it is traditional to place offerings of food for her on rooftops so she finds them while riding by.

Today in Austria, particularly Salzburg, where she is said to wander through Hohensalzburg Castle at dead of night, the Perchten are still a traditional part of holidays and festivals (such as the Carnival Fastnacht). The wooden animal masks made for the festivals are today called Perchten.

In the Pongau region of Austria large processions of Schönperchten (“beautiful Perchten”) and Schiachperchten (“ugly Perchten”) are held every winter. Beautiful masks are said to encouraging financial windfalls, and the ugly masks are worn to drive away evil spirits.

Other regional variations include the Tresterer in the Austrian Pinzgau region, the stilt dancers in the town of Unken, the Schnabelpercht  in the Unterinntal region and the Glöcklerlaufen (“bell-running”) in the Salzkammergut. A number of large ski-resorts have turned the tradition into a tourist attraction drawing large crowds every winter.

From: Encyclopedia of Spirits and Wikipedia

Promote Your Page Too
Bread Crumbs
A trail of bread crumbs just in case you lose your way exploring your higher power. Site News > The Powers That Be > What’s New > Death Spirits > Berchta