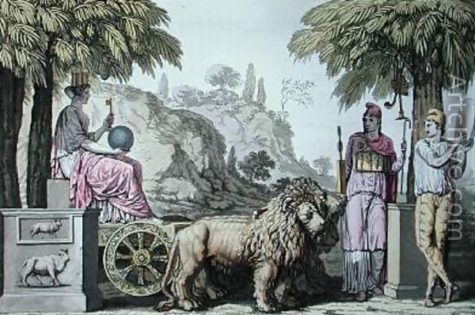 The Megalisia was a Phrygian festival in honor of Cybele, the Magna Mater. This was a festival with games celebrated at Rome in the month of April and in honor of the great mother of the gods. Following the advice of the Sibylline oracle on how to end the Punic wars, the meteorite which represented Cybele was brought from Phrygia to Rome in 204 BCE where it was installed in the Temple of victory on April 4th. The day of its arrival was solemnized with a magnificent procession, lectisternia, and games, and great numbers of people carried presents to the goddess at the Capitol.

The following harvest was great and the war ended the next year.

The regular celebration of the Megalesia, however, did not begin until about a dozen years later, when the temple which had been vowed and ordered to be built in 203 B.C., was completed and dedicated by M. Iunius Brutus.

The Romans began the celebrations with a parade, in which an image of the Goddess, Cybele, was carried through the streets in a chariot drawn by lions, her animals. The castrated priests who served her danced alongside, playing timbrels and cymbals and gashing themselves. Lucretius says “with bronze and silver they strew all the paths of her journey … and snow rose-blossoms over her.”Rome, commemorating the arrival of the goddess to her Roman Temple.”

The festival lasted for six days, beginning on the 4th of April. The season of this festival, like that of the whole month in which it took place, was full of general rejoicings and feasting. It was customary for the wealthy Romans on this occasion to invite one another mutually to their repasts, and the extravagant habits and the good living during these festive days were probably carried to a very high degree. For that reason, a senatusconsultum was issued in 161 B. C., prescribing that no one should go beyond a certain extent of expenditure.

The games which were held at the Megalesia were purely scenic, and not circenses. They were at first held on the Palatine in front of the temple of the goddess, but afterwards also in the theaters.

The first ludi scenici at Rome were, according to Valerius Antias, introduced at the Megalesia, either in 193 or 191 b.c. The day which was especially set apart for the performance of scenic plays was the third of the festival.

Slaves were not permitted to be present at the games, and the magistrates appeared dressed in a purple toga and praetexta, whence the proverb, purpura Megalensis. The games were under the superintendence of the Curule Aediles, and we know that four of the extant plays of Terence were performed at the Megalesia. Cicero, probably contrasting the games of the Megalesia with the more rude and barbarous games and exhibitions of the circus, calls them maxime casti, solemnes, religiosi.

The book, 365 Goddess, describes this festival as a Roman Festival celebrating the accuracy of the Sibylline oracles, who predicted the way for the Roman victory in the Punic Wars. Her suggestions for celebrating this ancient festival is as follows: 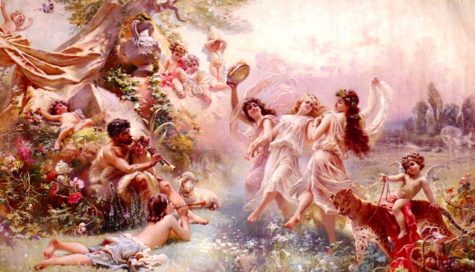 The Carmenae is a group of goddesses who correspond to the Muses of Greek tradition; they know our past, see what’s in store in the future, foretell children’s fates, and teach us the effective use of “letters” (the alphabet), the arts, and how to tell fortunes. They also oversee midwives.

Romans traditionally honored the goddesses today with music and song, so put on some magical tunes! The Carmenae will saturate the music and uplift your spirit.

Ask the Carmenae to help you write personalized invocations or spells today. Put pen to pad and let these goddesses inspire sacred words suited to your path and needs. Keep these in a magick journal for future use.

The Roman oracles often drew lots to determine a querent’s answer. If you have a question weighing heavily on your heart today, follow this custom and take out some variegated beans. Hold them. Concentrate on the question, then pick out one bean. A black one means “no”; white means “yes.” Red means that anger is driving action, brown means things are muddled, and green indicates growth potential. If you don’t have the beans, colored buttons or beads are a suitable alternative.