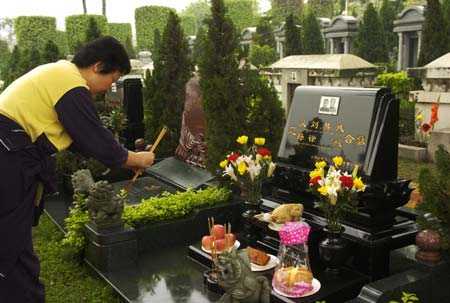 Qingming Festival (also known as Pure Brightness Festival or Tomb-sweeping Day), falls on either April 4th or 5th of the Gregorian calendar. The Chinese respect for filial piety and careful attention to funeral rites is visibly manifested in the custom of ancestor worship.

Since ancient times, a day has been designated for sweeping the tomb and honoring one’s ancestors. Though different in each family, these rites are usually performed on the first few days prior to or following Ching Ming, one of the traditional solar divisions falling in early April, when the frost retreats and spring returns bringing renewal to all living things.

When visiting the tomb, people usually bring the dead person’s favourite food and wine, and paper resembling money . This is in the hope that the deceased are not lacking food and money. After burning the paper money, tidying up the tomb, and putting willow branches around the gates and doors of the tomb to ward off evil spirits, people will eat the food and fruit before returning to their homes.

The folklore behind the story is as follows:

It is said that the Qingming Festival was originally held to commemorate a loyal man living in the Spring and Autumn Period (770 – 476 BC), named Jie Zitui. Jie cut a piece of meat from his own leg in order to save his hungry lord who was forced to go into exile when the crown was in jeopardy. The lord came back to his position nineteen years later, and forgot Jie Zitui but later felt ashamed and decided to reward him. However, Jie had blocked himself up in a mountain with his mother. In order to find Jie, the lord ordered that the mountain should be set on fire. Later Jie was found dead with his mother. In order to commemorate Jie, the lord ordered that the day Jie died was Hanshi (Cold Food) Festival – the day that only cold food could be eaten.

The second year, when the lord went to the mountain to sacrifice to Jie, he found willows revived, so he gave instructions that the day after Hanshi Festival was to be Qingming Festival. Later, the two festivals were combined as one.

Qingming Festival is a time of many different activities, among which the main ones are tomb sweeping, taking a spring outing, and flying kites. Some other lost customs like wearing willow branches on the head and riding on swings have added infinite joy in past days. The festival is a combination of sadness and happiness.

Cleaning the tomb and paying respect to the dead person with offerings are the two important parts of remembering the past relatives. Weeds around the tomb are cleared away and fresh soil is added to show care of the dead.

Today, with cremation taking over from burying, the custom has been extremely simplified in cities. Only flowers are presented to the dead relatives and revolutionary martyrs. No matter how respect is shown, good prayers for the deceased are expressed.

All in all, the Qingming Festival is an occasion of unique characteristics, integrating sorrowful tears to the dead with the continuous laughter from the spring outing.

Promote Your Page Too
Bread Crumbs
A trail of bread crumbs in case you lose your way wandering through this site ... Pagan Calendar > Blog Page > April > Tomb Sweeping Day