Overview of Day of the Dead 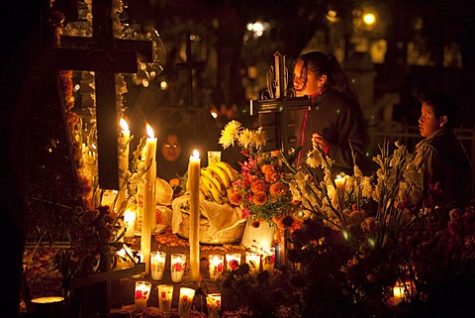 The Day of the Dead (El Día de los Muertos in Spanish) is a Mexican and Mexican-American celebration of deceased ancestors which occurs on November 1 and November 2, coinciding with the similar Roman Catholic celebrations of All Saints’ Day and All Souls’ Day.

While it is primarily viewed as a Mexican holiday, it is also celebrated in communities in the United States with large populations of Mexican-Americans, and to a lesser extent elsewhere in Latin America.

Despite the morbid subject matter, this holiday is celebrated joyfully, and though it occurs at the same time as Halloween, All Saints’ Day, and All Souls’ Day, the mood of The Day of the Dead is much lighter, with the emphasis on celebrating and honoring the lives of the deceased, rather than fearing evil or malevolent spirits.

HISTORY OF DAY OF THE DEAD

The origins of the celebration of The Day of the Dead in Mexico can be traced back to the indigenous peoples of Latin America, such as the Aztecs, Mayans Purepecha, Nahua and Totonac.

Rituals celebrating the lives of dead ancestors had been performed by these Mesoamerican civilizations for at least 3,000 years. It was common practice to keep skulls as trophies and display them during rituals to symbolize death and rebirth.

The festival which was to become El Día de los Muertos fell on the ninth month of the Aztec Solar Calendar, near the start of August, and was celebrated for the entire month. Festivities were presided over by the goddess Mictecacihuatl, known as the “Lady of the Dead”. The festivities were dedicated to the celebration of children and the lives of dead relatives.

When the Spanish Conquistadors arrived in Central America in the 15th century they were appalled at the indigenous pagan practices, and in an attempt to convert the locals to Catholicism moved the popular festival to the beginning of November to coincide with the Catholic All Saints and All Souls days. All Saints’ Day is the day after Halloween, which was in turn based on the earlier pagan ritual of Samhain, the Celtic day and feast of the dead. The Spanish combined their custom of Halloween with the similar Mesoamerican festival, creating The Day of the Dead.

DAY OF THE DEAD TRIVIA

The souls of children are believed to return first on November 1, with adult spirits following on November 2.

Plans for the festival are made throughout the year, including gathering the goods that will be offered to the dead. During the period of October 31 and November 2 families usually clean and decorate the graves. Some wealthier families build altars in their homes, but most simply visit the cemeteries where their loved ones are buried and decorate their graves with ofrendas, or offerings. These include:

Ofrendas are also put in homes, usually with foods and beverages dedicated to the deceased, some people believe the spirits of the deceased eat the spirit of the food, so after the festivity, they eat the food from the ofrendas, but think it lacks nutritional value.

In some parts of Mexico, like Mixquic, people spend all night beside the graves of their relatives.

Those gifted, like to write “calaveras”, these are little poems that mock epitaphs of friends. Newspapers dedicate “Calaveras” to public figures, with cartoons of skeletons. Theatrical presentations of “Don Juan Tenorio” by José Zorrilla (1817-1893) are also traditional on this day.

A common symbol of the holiday is the skull, which celebrants represent in masks called calacas. Sugar skulls, inscribed with the names of the deceased on the forehead, are often eaten by a relative or friend. Other special foods for El Día de los Muertos includes Pan de Muertos (bread of the dead), a sweet egg bread made in many shapes, from plain rounds to skulls and rabbits.

Posted in Day of the Dead, November | Tagged Cemetery, Death, Mexico, Rebirth, Spirits of the Dead

Promote Your Page Too
Bread Crumbs
A trail of bread crumbs in case you lose your way wandering through this site ... Pagan Calendar > Blog Page > Day of the Dead > Overview of Day of the Dead