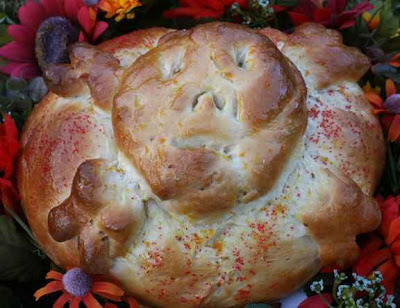 The pan de muerto (Spanish for Bread of the Dead or Day of the Dead Bread) is a type of bread from Mexico baked during the Dia de los Muertos season, around the end of October and the official holiday is celebrated on November 2. It is a soft bread shaped in round loaves with strips of dough attached on top (to resemble bones), and usually covered or sprinkled with sugar.

Another bread in the form of a sphere on the top represents a skull. The classic recipe for Pan de Muerto is a simple sweet bread recipe with the addition of anise seeds.

Pan de Muerto is sometimes baked with a toy skeleton inside. The one who finds the skeleton will have “good luck.” This bread is eaten during picnics at the graves along with tamales, cookies, and chocolate.

Instructions: Bring milk to boil and remove from heat. Stir in margarine or butter, 1/4 cup sugar and salt.

Separate the yolk and white of one egg. Add the yolk to the yeast mixture, but save the white for later. Now add flour to the yeast and egg. Blend well until dough ball is formed.

Flour a pastry board or work surface very well and place the dough in center. Knead until smooth. Return to large bowl and cover with dish towel. Let rise in warm place for 90 minutes. Meanwhile, grease a baking sheet and preheat the oven to 350 degrees.

Knead dough again on floured surface. Now divide the dough into fourths and set one fourth aside. Roll the remaining 3 pieces into “ropes.”

On greased baking sheet, pinch 3 rope ends together and braid. Finish by pinching ends together on opposite side. Divide the remaining dough in half and form 2 “bones.” Cross and lay them atop braided loaf.

Cover bread with dish towel and let rise for 30 minutes. Meanwhile, in a bowl, mix anise seed, cinnamon and 2 teaspoons sugar together. In another bowl, beat egg white lightly.

When 30 minutes are up, brush top of bread with egg white and sprinkle with sugar mixture, except on cross bones. Bake at 350 degrees for 35 minutes.