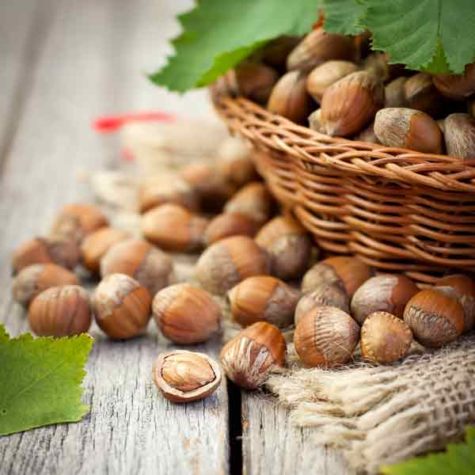 Early divination was often done using only the items at hand — sticks, vegetable peels, cloud formations, etc. Around the end of the harvest season, there wasn’t often much left in the fields.

However, nuts were often plentiful. Pecans, chestnuts, filberts and more would have been gathered up in baskets and stored, which made them the perfect medium for late fall divination. This is a similar celebration to Nutting Day, which falls in mid-September.

Filberts are the European variety of hazelnuts, and in some parts of England, they were used for divination purposes around Samhain night. In fact, for a while the practice was so popular that Halloween was sometimes referred to as Nut Crack Night. Filberts were placed in a pan over a fire and roasted. As they heated up, they would pop open. Young women watched the filberts carefully, because it was believed that if they popped enough to jump out of the pan, romantic success was guaranteed.

In some areas of Europe, the nuts were not roasted, but instead were ground into flour, which was then baked into special cakes and dessert breads.

These were eaten before bed, and were said to give the sleeper some very prophetic dreams. In a few regions, the flour was blended with butter and sugar to create Soul Cakes for All Soul’s Night.

Scottish poet Robert Burns describes a practice in which couples would roast a pair of nuts together, and the behavior of the nuts was indicative of the future of the relationship.

Burns says, “Burning the nuts is a favourite charm. They name the lad and lass to each particular nut, as they lay them in the fire; and accordingly as they burn quietly together, or start from beside one another, the course and issue of the courtship will be.”

Want to do your own Nut Crack Night divination? Select a pair of uncooked filberts. Assign a name to each for you and your lover. Place them in a pan over a fire, and watch to see what they do. Nuts that fly apart indicate that the relationship won’t last, but if they stay together, you’re practically guaranteed to be happy!