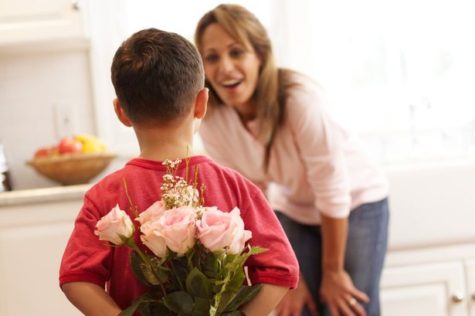 Mothering Sunday is a holiday celebrated by Catholic and Protestant Christians in some parts of Europe. It falls on the fourth Sunday in Lent, exactly three weeks before Easter.

The other names attributed to the fourth Sunday in Lent include:

Simnel Sunday is named after the practice of baking simnel cakes to celebrate the reuniting of families during the austerity of Lent. (Here is a recipe: Simnel Cake.) Because there is traditionally a relaxation of Lenten vows on this particular Sunday in celebration of the fellowship of family and church, the name Refreshment Sunday is sometimes used, although rarely today.

Simnel cake is a traditional confection associated with both Mothering Sunday and Easter. Around 1600, when the celebration was only held in England and Scotland, a different kind of pastry was preferred. In England, “Mothering Buns” or “Mothering Sunday Buns” were made to celebrate. These sweet buns are topped with pink or white icing and the multi-colored sprinkles known as “hundreds and thousands” in the UK. (Here’s a recipe: Mothering Buns).  They are not widely made or served today in the UK but in Australia they are a bakery staple, not related to any particular celebration. In Northern England and Scotland some preferred “Carlings”, pancakes made of steeped peas fried in butter.

It is sometimes said that Mothering Sunday was once observed as a day on which people would visit their “mother” church. During the 16th century, people returned to their mother church, the main church or cathedral of the area, for a service to be held on Laetare Sunday. This was either the church where they were baptized, or the local parish church, or more often the nearest cathedral.

Anyone who did this was commonly said to have gone “a-mothering”, although whether this term preceded the observance of Mothering Sunday is unclear. In later times, Mothering Sunday became a day when domestic servants were given a day off to visit their mother church, usually with their own mothers and other family members. The children would pick wild flowers along the way to place in the church or give to their mothers. Eventually, the religious tradition evolved into the Mothering Sunday secular tradition of giving gifts to mothers. 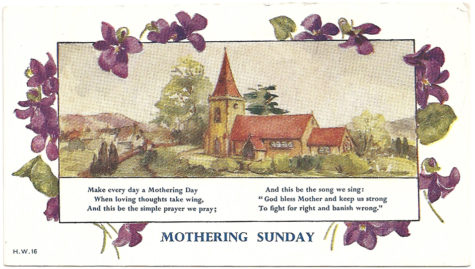 It was often the only time that whole families could gather together, since on other days they were prevented by conflicting working hours, and servants were not given free days on other occasions.

By the 1920’s the custom of keeping Mothering Sunday had tended to lapse in Ireland and in continental Europe. In 1914, inspired by Anna Jarvis’s efforts in the United States, Constance Penswick-Smith created the Mothering Sunday Movement, and in 1921 she wrote a book asking for the revival of the festival.

Its wide scale revival was through the influence of American and Canadian soldiers serving abroad during World War II; the traditions of Mothering Sunday, still practiced by the Church of England and Church of Ireland were merged with the newly imported traditions and celebrated in the wider Catholic and secular society. UK-based merchants saw the commercial opportunity in the holiday and relentlessly promoted it in the UK; by the 1950’s, it was celebrated across all the UK.

People from Ireland and the UK started celebrating Mothers’ Day on the same day that Mothering Sunday was celebrated, the fourth Sunday in Lent. The two celebrations have now been mixed up, and many people think that they are the same thing.

Mothering Sunday remains in the calendar of some Canadian Anglican churches, particularly those with strong English connections.

Promote Your Page Too
Bread Crumbs
A trail of bread crumbs in case you lose your way wandering through this site ... Pagan Calendar > Blog Page > Easter Celebrations > Mothering Sunday