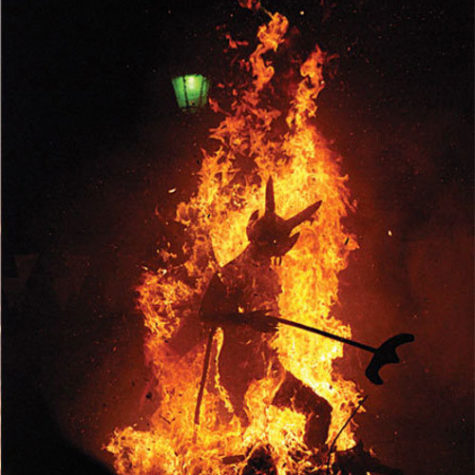 Burning the Devil or La Quema del Diablo is a tradition held every December 7, at 6:00 in the evening sharp, families build bonfires outside their homes and burn effigy of Satan. It is a tradition that many Guatemalans take part as a way to cleanse their home from devils that lurk in their home, creeping behind the furniture or hiding under the bed.

La quema del diablo can be traced to colonial time, a tradition that started since the 18th century. Held on the eve of the Feast of the Immaculate Conception and as a prelude to holiday season, those who could afford it adorns the fronts of their houses with lanterns, but for those who have lesser means builds a bonfires from their trash to celebrate the occasion.

A symbolical tradition  with a belief that the fire burns the devil serves as purifying element, as the Virgin Mary was the blessed one to conceive baby Jesus must be free from any form of evil, therefore the event serves as “burning the devil” to  clear the way for Mary’s feast.

Though the celebration may sound fun, it is controversial especially for the environmentalist groups. Back in the days, mostly paper were burned for the “cleansing ritual”, but now, piles of rubbish are mostly made of plastic and rubber that causes air pollution. 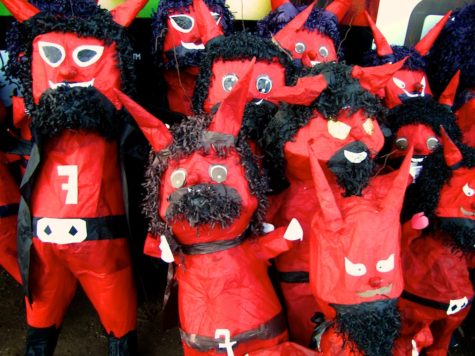 Over time the tradition evolved, from burning piles of garbage and pieces of furniture to being replaced by the effigy of Satan in a form of piñatas.

The tradition has special significance in Guatemala City because of its anticipation of Feast of the Immaculate Conception, the patron saint of the city. Along the street of Zona 1, the historic city center, many vendors pile the street selling stuffs associated with La Quema del Diablo, from firecrackers to simple and intricate devil piñatas. In different parts of the city, people celebrate and burn their own devil piñatas.

The tradition continues, as the idea is to burn all the bad from the previous year and to start anew from the ashes. It is widely observed throughout the country, The Devil is burned at the stroke of six. In Antigua, the former capital of the country, a devil three stories tall is constructed and burned in the city square. 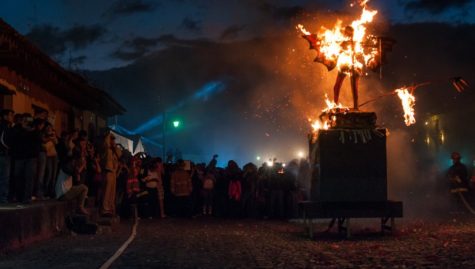 A variation of this tradition is held in San Antonio Palopo. In this very unique celebration, they carry a statue of Maximón around town with a noose around his neck, they locals then hang Maximón by his neck in front of Catholic church, douse him with gasoline, and set him on fire. This is the local way of showing respect to the Christian god.

Setting people on fire has been a way of ridding the town of evil doers for many centuries. As soon as the Spaniards settled in Guatemala they brought with them the Christian religion. The Christian religion frowned on bloodshed. So instead they burned evil doers alive to kill them. This way they did not shed blood and therefor committed no sin.

Most of the inhabitants still pray to both the Christian and Mayan gods and deities such as Maximón or ancestors. They often ask for healing, wealth, help with love and sexual fertility.

The locals say they pray to both just in case one god does not grant their wishes the other might. This happens with both evangelical and Catholic believers. ( Not all, but the majority) This is kept secret for fear of discrimination from others.

While the many of the locals pray to both god and deities they publicly denounce Maximón shortly before Christmas by dragging him around the village then hang him with a noose and set him on fire.

The political version of this festival:

Guatemalans burn traditional devil puppets to start their Christmas celebrations. The ceremonial burning of devils started in the 16th century and is meant to chase away bad spirits. And in 2016, US president-elect Donald Trump was a big hit. But not in a good way. 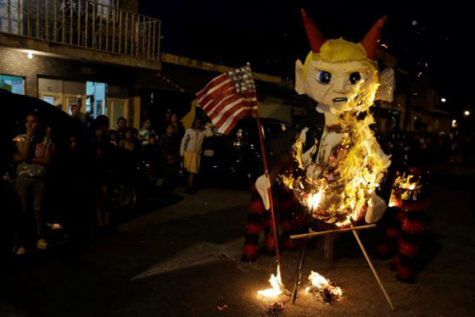 Revelers in Guatemala set ablaze cardboard piñata of Trump wearing devil horns. In fact, piñata makers said Trump is far and away the best-seller. Trump’s hardline stance on immigration during his election campaign, including a promise to build a wall along the US-Mexico border, has drawn anger from Latin Americans in the US and around the world.

So this is a way to vent out the anger? It can be. Guatemalans believe the practice of torching the devil helps banish bad spirits from their homes and neighborhoods.

Posted in December, Fire Festivals | Tagged Bonfires, Cleansing and Clearing, Latin America, Out With The Old, Purification, The Devil