Poseidon was once worshiped in every part of Greece as a God of general importance to the community.  In ancient Greece, the feast day in his honor was widely celebrated at the beginning of the winter. 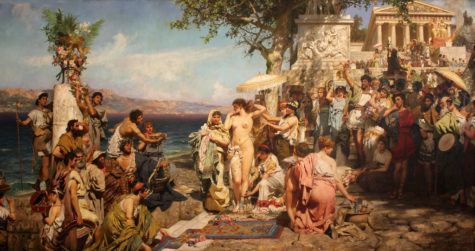 POSEIDO′NIA (ποσειδώνια), a festival held every year in Aegina in honour of Poseidon. It seems to have been celebrated by all the inhabitants of the island, as Athenaeus calls it a panegyris, and mentions that during one celebration Phryne, the celebrated hetaera, walked naked into the sea in the presence of the assembled Greeks. This was possibly because in Greek mythology, the sea god Poseidon is one of the most lascivious of the gods, producing more offspring than other note worthily randy gods.

Greek calendars vary from place to place, but in Athens and other parts of ancient Greece, there is a month that corresponds to roughly December/January that is named Poseideon for the sea-god Poseidon. The month of Poseidonia’s most anticipated and most important festival is the feast of the Poseidonia, a winter festival in honor of Poseidon. Since Poseidon is a sea god it is curious that his festival would be held during the time the Greeks were least likely to set sail.

It was celebrated with the pouring and drinking of wine, merriment, bonfires, and most likely a form of gift giving. Not much more is known about the way it was celebrated.

On a larger scale, “there was a festival once every fifth year at Sunium in honor of Poseidon – evidently, then, a major event. Also, animal offerings to Poseidon were a common feature at the feast days of other gods, including the “festival at the temple of Hera on the 27th of Gamelion,” which honored the goddess “together with Zeus the Accomplisher, Kourotrophos and Poseidon.”

One Response to Festival of Poseidon

Promote Your Page Too
Bread Crumbs
A trail of bread crumbs in case you lose your way wandering through this site ... Pagan Calendar > Blog Page > December > Festival of Poseidon