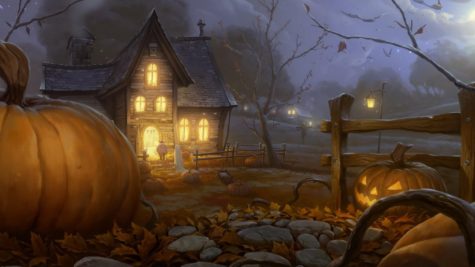 Halloween or All Hallow’s Eve occurs on  October 31, and originated with the ancient Celts, who, beginning at sundown on October 31 and extending into November 1, celebrated Samhain (pronounced sow-in, which rhymes with cow-in), which marked the end of harvest time and the beginning of the new year. The ancient Celts believed that at this time, the veil between the worlds of the living and the dead was at its thinnest, thereby making it a good time to communicate with the deceased and to divine the future.

In later years, the Irish used hollowed-out, candlelit turnips, carved with a demon’s face to frighten away the spirits. When Irish immigrants in the 1840s found few turnips in the United States, they used the more plentiful pumpkins instead.

In many parts of the world, the Christian religious observances of All Hallows’ Eve, including attending church services and lighting candles on the graves of the dead, remain popular,  although elsewhere it is a more commercial and secular celebration. Some Christians historically abstained from meat on All Hallows’ Eve, a tradition reflected in the eating of certain foods on this vigil day, including apples, potato pancakes and soul cakes.