Depina Hekates ~ Night of the Crossroads 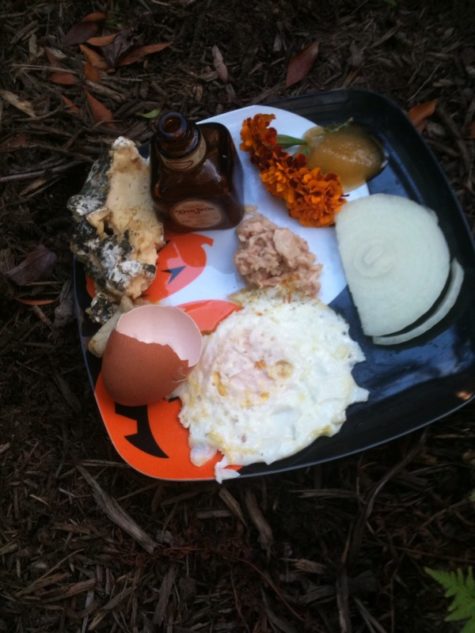 For modern Wiccans and Neo-Pagans, Nov 16 is designated as Hekate Night, or the Night of the Crossroads, the day of the festival of Hecate Trivia, which is a day that honors Hecate as a goddess of crossroads.

Her feast day begins at sunset, and most often consists of a feast referred to as Hekate Supper, A meal to which Hekate is invited, and given her own plate of food, which is then left at a crossroads.

This practice, particularly associated with the sacred three-way crossroads of Hekate, is the depina Hekates, or Hekate Supper. It may be that these offerings were made to appease ghosts and keep them at the crossroads, avoiding trouble from them whilst traveling etc. Alternatively these offerings were described as being made to placate the goddess and ensure that she would look favorably upon those who made regular offerings.

It has been suggested that the crossroads was sacred to Hekate due to her having been abandoned at a crossroads as a baby by her mother Pheraea, and then rescued and brought up by shepherds. This Thessalian tale comes from a scholiast to Lycophron’s 3rd century BCE play Alexandria, and was a late invention.

Aristophanes recorded that offerings to Hekate were made “on the eve of the new moon” which is when the first sliver of the new moon is visible, signifying a possible connection with Hekate as a lunar goddess, rising, like the moon, from the underworld on the night of the new moon.

There are also references to the offerings being made on the thirtieth day of the month, but keep in mind that this was calculated on the Greek calendars, it would vary from state to state as there was no uniformity in the calendar system being used.

It has further been suggested that the offerings made at the Hekate Suppers were a form of charity, and certainly the consumption of the food by the poor was noted by Aristophanes (5th century satirist):

“Ask Hekate whether it is better to be rich or starving; she will tell you that the rich send her a meal every month and that the poor make it disappear before it is even served.”

The 10th century Byzantine encyclopedia, the Suda, paraphrased this quote and added the following:

“From her one may learn whether it is better to be rich or to go hungry. For she says that those who have and who are wealthy should send her a dinner each month, but that the poor among mankind should snatch it before they put it down. For it was customary for the rich to offer loaves and other things to Hekate each month, and for the poor to take from them.”

Various sources mention different foods offered to Hekate at the suppers. These were:

Another type of food offering which was left to Hekate on the eve of the full moon was the amphiphon, a type of cake. Amphiphon means “light-about,” an appropriate name for this flat cheesecake which was surrounded by small torches.

The supper, or leaving of offerings at the crossroads was one of the hardest practices for the Christian church to stamp out. Records indicate it was still taking place in the 11th century CE, and it may well have continued far longer.

She is the Triple Goddess, and most often associated with a three-way crossroad. She is Hecate the Maiden, Hecate the Mother, and Hecate the Crone. Although the dark of the moon is her traditional time, Hecate can be called upon during any moon phase, as She is the One and the Three. 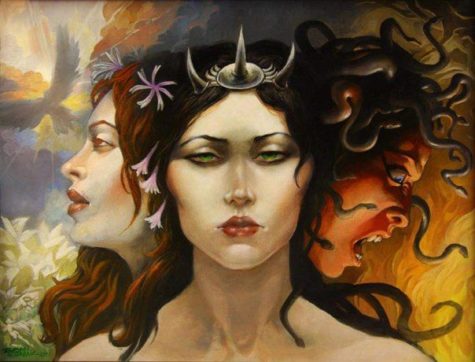 She is the goddess of witchcraft, the night, the new moon, ghosts, necromancy and crossroads. Hekate had few public temples in the ancient world, however, small household shrines, which were erected to ward off evil and the malevolent powers of witchcraft, were quite common.

She is a Goddess like no other. A goddess who is not to be invoked lightly, or by those who are calling upon her frivolously. Some describe her as a Witch Goddess who rises up from the dark depths of the underworld, whilst others tell of a bright shining Goddess who holds her torches of illumination high, revealing the path through the mysteries, but only for those with the wisdom to follow her.

Some say that she is the Axis Mundi, the Chaldean World Soul and that she brings soul fire and light to humanity. Others tell of a powerful Goddess who is crowned with the coils of wild serpents and oak leaves, appearing with three heads, often with three bodies, sometimes in forms which are part-human and part-beast. We are told that she holds sway in many worlds, bearing the keys to the thresholds between, guarding and blessing those who make suitable offerings to her, but feared by those who let injustice come upon the world.

Hekate stands at the crossroads bearing the keys to the mysteries. In the ancient world she inspired poets and philosophers, witches, magicians and ordinary people, all of whom knew she could bestow blessings to improve their lot and protect them from the harsh denizens of the infernal realm. Today she continues to inspire and evoke awe in those who encounter her; for some in subtle ways, leading them in an elusive nameless manner with her symbols, for others in a more powerful and directly empowering way.

Promote Your Page Too
Bread Crumbs
A trail of bread crumbs in case you lose your way wandering through this site ... Pagan Calendar > Blog Page > November > Depina Hekates ~ Night of the Crossroads