Blins or blini were symbolically considered by early Slavic peoples in pre-Christian times as a symbol of the sun, due to their round form. They were traditionally prepared at the end of winter to honor the rebirth of the new sun. This tradition was adopted by the Orthodox church (Shrovetide, Butter Week, or Maslenitsa) and is carried on to the present day. Blini were also served at wakes to commemorate the recently deceased. 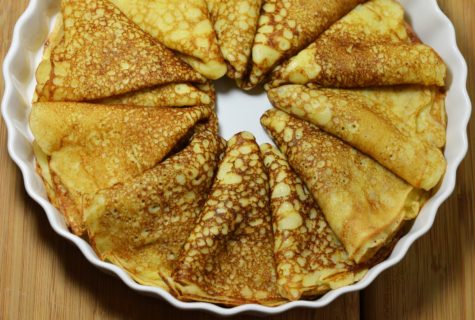 Traditional Russian blini are made with yeasted batter, which is left to rise and then diluted with cold or boiling water or milk. When diluted with boiling water, they are referred to as zavarniye blini. The blini are then baked in a traditional Russian oven. The process of cooking blini is still referred to as baking in Russian, even though these days they are almost universally pan-fried, like pancakes.

French crêpes made from unyeasted batter (usually made of flour, milk, and eggs) are also not uncommon in Russia, where they are called blinchiki and are considered to be an imported dish. All kinds of flour may be used for making blini: from wheat and buckwheat to oatmeal and millet, although wheat is currently the most popular.

What follows is a recipe for traditional Russian blini from RusCuisine. These pancakes are served with different dressings – most popular are sour cream, jam, syrup, red caviar, salmon, cottage cheese and others.

Mix the egg yolks and remaining sugar and add to the natter along with the butter and beat with an electric mixer for 3 minutes or by hand for 8 minutes. Whip the egg white separately and whip the cream as well until very stiff. Fold in the cream then the egg white making sure to mix well. Cover again and place in a warm place for 45 minutes.

Grease the skillet with butter, place 2 tablespoons of batter in the center of the skillet, (at this point you may add any of the flavor garnishes that you wish or none at all) cook for 1 minute, turn the bliny over, and cook for 35 seconds, and serve smothered in sweet butter.

Promote Your Page Too
Bread Crumbs
A trail of bread crumbs in case you lose your way wandering through this site ... Pagan Calendar > Blog Page > Easter Celebrations > Classic Krasnye Blini